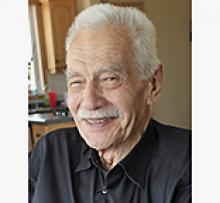 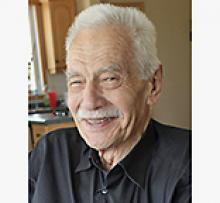 Jean René Allard was born on September 22, 1930, the first born of Donalda (Champagne) and Alfred Allard. He passed away December 2, 2020.
Jean was a brother to Guy (deceased), Sylvie (deceased), Jocelyne, Marguerite, Yves (Louise), Noël (deceased) and Denise. Jean leaves to mourn six children: Sylvette (Mario Lincourt), her mother Catherine Whyte (deceased), Paul (Veronica), Pierre, Luc (Julie), Marika (Ray Sylvestre), Marc (Autumn) and their mother Beverley. He was a proud pépère to 12 grandchildren; and four great grandchildren.
In his younger years, Jean, like many young prairie fellows, moved to make his fortune in B.C. Amongst many careers and jobs, he worked as a logger, deep sea fisherman and cannery worker. While out west, he met his first wife, Catherine, and soon welcomed their first child, Sylvette. Shortly after Sylvette's birth in 1952, he brought his family back to Manitoba. Unfortunately, while in Manitoba, Catherine was diagnosed with leukemia. Jean brought Catherine back to Vancouver to see her family in 1956 where she sadly passed away, leaving Jean and Sylvette to mourn her. While on the west coast, Jean continued to work on fishing boats with his brother Guy off of the cold north waters of B.C. to support his daughter, Sylvette.
The 1960s were a whirlwind and Jean attended the University of Manitoba where he made lifelong friends. He worked as a civil servant in various roles in Northern Manitoba and formally entered the political arena. In 1969 Jean ran and won in Rupertsland as a NDP with Ed Schreyer in the Manitoba Legislature. As this meant that he was often on the highway in his constituency, he always carried a fruitcake in his glove compartment as he felt if he landed in the ditch he had nourishment. While his formal political career was of only one term, Jean felt that he had learned a lot about the inner workings of political and public policy and its effects on Canadians; opinion and knowledge which he was not afraid to voice and to share.
Around that time, Jean acquired a mile of beautiful beach with surrounding properties on Lake Manitoba. He married Beverley Bohonos and the first of five children was born. Jean then returned to the University of Manitoba as a law student where he received his law degree. In 1980 the family moved to the energetic and vibrant community of St. Laurent where he ran his land development business, Lake Manitoba Estates. Life became very busy - raising children, raising 101 Dalmatians, selling lots. To add to the fun, Jean felt that the children needed to see another culture and so the family of seven found themselves in a van driving to Mexico for several winter trips. Education was always of importance to Jean and he spent years driving the children to Winnipeg each day to a variety of schools, never missing a day before the family permanently moved back to Winnipeg.
Amongst many things, Jean was proud of his Métis heritage, his leadership role - including presidency of L'Union Nationale Métisse Saint-Joseph, and authoring the unpublished manuscript Big Bear's Treaty, a concept that he developed and was very passionate about. His desire for justice led him to be involved in various groups raising awareness as to the struggles of Indigenous people in Canada, including in 2002
co-founding the Treaty Annuity Working Group (see mawg.ca).
Jean tenait à son héritage Canadien-Français et était fier que tous ses enfants, petits enfants et arrière petits enfants parlent sa langue maternelle.
Jean's interest in politics, global affairs and many other subjects never waned. At 90 years old he felt he still had purpose in life and things he wanted to do. If you asked him what he thought of a situation anywhere in the world Jean had, as usual, an informed opinion. To those who knew him, he will be remembered as a man of conviction.
A heartfelt thank you to the wonderful team at 2DE, Action Marguerite St. Boniface where Jean spent his last two years making plans and sharing stories with the staff.

JEAN RENE ALLARD
1930 - 2020
Jean Rene Allard has passed away
at age 90 with family by his side.
Longer obituary to follow.