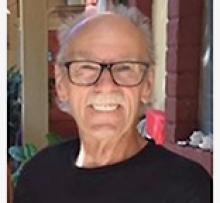 It is with profound sadness that we announce the sudden passing of our father, grandfather, brother, uncle, cousin and friend, René Pelletier, age 75, on Tuesday, December 1, 2020, at the Ste. Anne Hospital.
René was predeceased by his wife Doris Pelletier in July, 2020; his daughter Nicolle at the age of five years; his father Émile Pelletier; his mother Léa (Nault) Pelletier; and his father-in-law Keith Watson.
He will be sadly missed by his daughter Tanya (Nick); his beloved grandchildren, Stasio, Demetri, and Kristina; his brother Robert (Carol) McKinnon; his stepmother Noëlie Palud-Pelletier; his mother-in-law Ellen Watson; sisters-in-law Gwenn (Dan) AmOrde, Johanna Renn; his "big" brother-in-law Grant (Emily) Watson; as well as many extended family and friends.
René was born and raised in St. Boniface, where he attended l'école Provencher and Collège St. Boniface. He often shared his fond memories of times spent with his matantes, mononcles and many cousins in both St. Pierre-Jolys and St Boniface. He met his wife Doris in Fort Frances, and together they started their life in 1970. Shortly after, he began his career with Canada Customs at the Emerson Border, then came to Winnipeg and worked at the airport. He worked in many locations, which took him to interesting places including Churchill, Cyprus, Inuvik, Tuktoyaktuk and Iqaluit, then retired in Fort Frances with over 30 years of service. Together Mom and Dad moved back to Manitoba to be closer to their grandkids, and settled in the Paradise Village community.
René spent many hours volunteering with the Knights of Columbus, driving Pokey's Van, as well as driving cancer patients to and from their appointments.
René spent many summers helping out at Aiken's Lake Lodge, he was one of the original "Molly Maids" earning him the nickname "Short Molly". He joined La Brigade de la Rivière Rouge and enjoyed many years of celebrating his francophone heritage and the history of the voyageurs / fur trade on annual canoe trips and community activities. Some may know him by his Voyageur name, Baptiste Nault.
René enjoyed curling, playing softball, taking many adventurous road trips, hunting and fishing trips with his best buddies, as well as many trips to Melaque, Mexico. He was the life of the party wherever he went, had a great "Joie de Vivre". He was a terrific storyteller and could captivate his audience with his quick wit and terrific sense of humour, leaving a legacy of friendships behind.

Dad we will miss you immensely, we love you so much. May your memory be eternal.

A private Funeral Mass will be held on Tuesday, December 8, 2020, at Sainte Anne Roman Catholic Church.
In lieu of flowers, donations may be made to the Heart & Stroke Fund.

Family and friends may sign a Book of Condolence at www.crossingsfuneralcare.ca