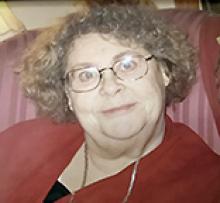 Diana Harwood-Jones was born September 28, 1943 in Montreal, Quebec.
She passed away on Monday, November 30, 2020.
Diana will be lovingly remembered by her children, Todd (Lucie), Tawny (Alex), Patrick; as well as grandchildren, Shane, Michael, Emy and Eric; and siblings, Heather and Ross (as well as her large extended family).
As the busy mother of young children, Diana sold Avon and as she always gives her all, she was awarded a top sales award for Western Canada. Following that, Diana spent her entire career span of 25 years working for Manitoba Hydro in Personnel Records, which was a perfect fit as she loved meeting people. Upon retiring, April 14, 1997, Diana became enthusiastically involved with the Hydro X club, enjoying trips with them, and was currently their president. She also volunteered as a tour guide at the Manitoba Electrical Museum. St. Michael's and All Angels Church was home to Diana as much as her own home. She devoted much of her time and energy into all aspects of the church, from roles as a warden, vestry member, synod delegate, choir member, envelope secretary, bell ringer, lessons reader, counting, fundraising, bulletin creation, etc. Her husband Tim supported her devotion to St. Michael's, which he also loved, and together they contributed to the life of the church. They also shared time on trips (her favourite thing to do), and spent many happy days travelling the world throughout their 48 years together.
Diana's various interests included a fascination with the monarchy, a dedication to watching game shows (especially Jeopardy), and games in general, such as crosswords. Diana and her sister Heather could be found for hours in serious backgammon competition on her dining room table. She also spent countless hours devouring books, and could read before she was in kindergarten. She was a living encyclopedia and remembered everything from numbers to birthdays for everyone.
Diana was an extremely loving and caring individual, and the door was always open. She was someone your secrets would be safe with, and she never judged people. Her outgoing, patient nature and her great sense of humour made her loved by all who met her. Friends of her children still call her Mom. Her hugs were like medicine.
Diana's passing is devastating to many. She will be missed beyond measure. She will be remembered as the wonderful person, friend and confidant that she always was. She was her children's hero and her husband's rock. We love you more than can be expressed, Diana. We have some comfort in knowing that the pain you endured, without complaint, is gone.
Due to Covid-19 restrictions, a private family service will be held (date to be determined for late in December). Those who cannot attend will be able to watch on zoom. A larger celebration of her life will be held after Covid-19 restrictions have passed.
Expressions of condolences can be left for Diana at richardrosin.ca.
Donations in memory of Diana may be made to St. Michael's and All Angels Church, 300 Hugo St. N., Winnipeg, MB R3M 2N7.