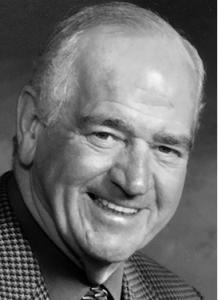 KELLEHER: Patrick Joseph 'Butch' Kelleher born on March 29, 1936 died peacefully in the early morning of December 9th, with an angel by his side at the age of 84 years. Pat, PJ, or Butch--as he was known as a child and young athlete at Athol Murray Notre Dame School in the early 1950's and well into the 80's-- started life in Brandon as the seventh of eight children of Reuben Ambrose "Kelly" Kelleher and Florence Adora "Dot" Holmes-Kelleher. Butch grew up in the family home at First Street and Lorne Avenue with his older siblings and, 20 months later, his youngest sister, Twyla. He was predeceased by his sisters, June, age 2, Dawna (Phillips), age 72, Gloria (Dunsmore), age 86, Mae (Cotter), age 92, grandson, Sam, age 27, and brothers, Jim, age 91 and Jack, age 89. He is survived by his wife of 66 years, Joan (Moore), his children, James (Sherrie), Kevin (Oy), Tracy (Jim), Barb (Gallagher), John (Nancy), Leslie, Liz, and Mary (Art), and his youngest sister, Twyla (Warwaruk) as well as numerous nieces and nephews and their offspring. He also leaves behind 18 living grandchildren and, on last count, 16 great grandchildren, with 2 more on the way. Butch received his early academic, spiritual, and physical education under the tutelage and coaching of Father "Pere" Athol Murray, later Monsignor, at Notre Dame College in Wilcox, Saskatchewan. He played hockey and was good enough to spend 2 seasons playing for the Brandon Wheat Kings in '52-'53 and '53-'54. He also attended the Detroit Red Wings tryouts in 1954 where he suffered the full brunt of Gordie Howe's elbows. He developed a lifelong relationship with Pere Murray and was an active member of the alumni and governing board and is named as an Honorary Regent of what is now called the Athol Murray College of Notre Dame. After graduating from Notre Dame in 1953, he obtained a university degree by distance education through Queen's University, articled, and, in 1958, passed the exam to become a Chartered Accountant. During those years he was no bookworm. He met and fell in love with Joan Moore, who decided she would marry him in 1954. They had 8 children between 1955 and 1966. What is remarkable is all that he accomplished (other than his large family). He articled with M.S. Donovan, and later became a partner at Donovan Stone Chartered Accountants. Mom tells us that he used to go to Brandon Automobiles to do the books once a month and, even in those days, decided he would like to own a 'garage'. He eventually decided to open his own firm, Kelleher & Company, Chartered Accountants, in 1980. Because of his involvement in the Children's Aid Society, he started helping people in personal bankruptcy and later went on to become a licensed trustee in bankruptcy. To this day, we meet people and families who were so grateful to him for helping them save their homes or their businesses. He was one of the good guys. PJ's dream of owning a car dealership became reality when, in 1990, he purchased Wilton's, which became Kelleher Lincoln Mercury. He was a skilled manager and the business prospered under his direction. In 1993, he bought the Ford dealership in Thompson. Both 'garages' are still in the family -- owned now by John in Brandon and Kevin and Mary in Thompson. In 2004, together with Don Penny and Merv Dillabough, he was the co-recipient of the Lifetime Business Builder Award from the Brandon Chamber of Commerce, only the second time that award was given. Dad was involved in the building of Hillcrest Place in 1971 and all eight of his children had jobs there at one time or another. He also had a hand in the Keystone Centre project. He was a tireless volunteer: he devoted countless hours to helping St. Augustine's Church, was a volunteer and Board member for the Children's Aid Society and played a major role in the building of the CFS home called Patrick House. He was also a member of the Knights of Columbus and the Kinsmen. He loved golf (especially the three times he got a hole-in-one), a good red wine, his friends, the Liberal Party, the stock market, a good story, and his family. He and Mom travelled extensively and eventually retired to Florida in the winter and Clear Lake in the summer until he became too unwell to continue. He always took greater pleasure in the successes of his family, friends, and clients than he did in his own accomplishments. He loved our Mom, Joan; she was his wife, confidant, best friend, and equal partner in all his personal and business dealings. He was an optimist, and he never gave up on the people he loved. He will be dearly missed. A Mass of Christian Burial will be held at St. Augustine's Roman Catholic Church on Saturday, December 12, 2020. The family invites you to watch the livestream of the Mass of Christian Burial for Patrick, on Saturday, December 12, 2020 at 2:00 p.m. (CST) by visiting Patrick's tribute page at www.brockiedonovan.com. In lieu of flowers, donations in memory of Patrick may be made to the Alzheimer's Society of Manitoba, 457-9th St., Brandon, MB, R7A 1K2.