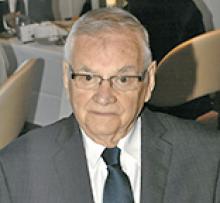 It is with heavy hearts and profound sadness, that we announce the passing of Jean-Paul Cadieux at St. Boniface Hospital.
JP will be greatly missed and forever remembered by his wife of 57 years, Pauline (née Collette); his children, Brian (Maria) and Mona-Lynne (Sal); his cherished granddaughters, Bianca and Erica; his brother Denis (Gladys) and sister-in-law Lynette.
JP was predeceased by his parents, Jean and Marie-Paule Cadieux and his brother Roger.
JP was born in St. Boniface, but was raised in Letellier, MB. His successful career in sales brought him to different places such as Portage La Prairie, Roblin, Duluth, MN, Montréal, PQ, Eagan, MN and back to Winnipeg, to his castle with his queen. He married the love of his life and was a dedicated family man who was especially proud and fond of his two granddaughters. His passions in life were travelling, spending time with family, watching sports on TV and going out to great restaurants. JP's number one saying was "What's the Plan?" and we heard it often.
The family would like to thank the healthcare providers who took care of him over the past year and a half.
In lieu of flowers, donations can be made in JP's memory to CancerCare Manitoba Foundation, 1160-675 McDermot Avenue, Winnipeg, MB R3E 0V9.
"JP ta présence restera dans nos coeurs pour toujours."
Memorial service arrangements are pending.