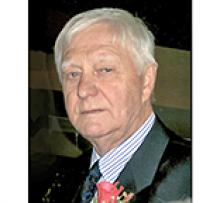 Abe died peacefully at home, surrounded by his family. He was born to Nick and Helena Friesen in Kronsgard, MB. In 1950 his family moved to a farm near Elm Creek, MB and after completing high school, Abe attended Normal School. He began his teaching career at the Boyne School (near Carmen, MB) and then moved to Winnipeg. After completing his B.A. and B. Ed. at the University of Manitoba, he spent the next 30 years as a teacher, Vice-Principal and Principal, in the St. James-Assiniboia School Division. He was the Principal at both Bedson and Voyager Elementary Schools for 27 years before his retirement in 1992.
He married the love of his life - Marie (Penner) in 1962 and together they were blessed with having four children. Abe was a strong and faithful follower of JESUS CHRIST, serving HIM faithfully till the end of his life, in roles as a Deacon; Adult Sunday School Teacher; Bible Study Leader and Congregational Leader. He was also active in the spiritual lives of his children and grandchildren - making sure they all understood the Gospel message.
Abe enjoyed competitive sports such as curling and golfing. During his retirement years, he spent time travelling to several overseas countries - Israel, Greece, Austria, Russia. He also spent six weeks in St. Petersburg, Russia, teaching English as a second language.
Abe is survived by his loving wife Marie and children: Cheryl (Bernie) Krause; Errick (Darcie) Friesen; Jennifer (Wilf) Regier; Russell (Shari) Friesen; nine grandchildren: Karl (Kayla); Erin (Erik); Kathleen (Darius); Lauren; Leah; Alexandra (Michael); Ian; Joshua and Kristin, plus nine great-grandchildren. He is survived by his siblings: Dave (Margaret); Menno (Shirley); John (Mari); Margaret Janzen; Leonard; brother-in-law Don Melvin; and numerous nieces and nephews. Dad was predeceased by his parents; sister Susan Melvin; brother-in-law Alvin Janzen; sisters-in-law, Doris Friesen and Francis Friesen.
Dad's quiet presence and sense of humour will be sorely missed. He was a man of integrity, very loyal and deeply committed to his family and friends.
Psalm 17:15, "As for me, I will see YOUR face in righteousness; I will be satisfied when I awake in YOUR likeness".
Due to COVID restrictions, a graveside funeral was held on December 11, 2020 at the Elm Creek Cemetery.
In lieu of flowers, donations can be made to: Union Gospel Mission; PO Box 1073 STN Main, Winnipeg, MB R3C 2X4.