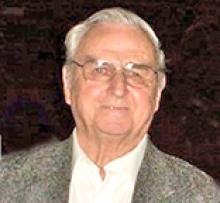 It is with heavy hearts we announce the passing of our father, Clarence William Conrad, on December 5, 2020, in Winnipeg at the age of 90.
Clary has gone to join his beloved wife, Joyce and his daughter, Beverley, leaving to mourn are his children, Paul (Patty), Patricia (Marshall), and Everett (Cheryl) and son-in-law Leonard; 11 grandchildren and 11 great-grandchildren.
Clary was born and raised in Chezzetcook, Nova Scotia and moved to Winnipeg in 1968 with his wife, Joyce and family.
Over the years, Clary worked in the construction industry in various capacities, a carpenter, Superintendent and finally running his own business, Oak Park Millwork. Clary worked all over the province of Manitoba and Saskatchewan making many friends and acquaintances.
Growing up in Nova Scotia, Clary became a gifted fiddle player. He loved to entertain by playing his fiddle and there was always a party with another fiddle player, guitar player and keyboard to go along with him. He especially enjoyed playing with the Southglen Fiddlers in his later years. He enjoyed having his grandchildren around him whether it be in his mill, making wine, playing the fiddle, having a drink, or just having a chat. He was always in his mill making something for his kids or grandchildren. We can all look around and see something, Dad or Papa made us.
We will miss you but you will always be with us in the treasured gifts you made us and the music you have left us.
In keeping with Dad's wishes, cremation has taken place and a family graveside service will be held at a later date.

Condolences may be left at mackenziefh.com