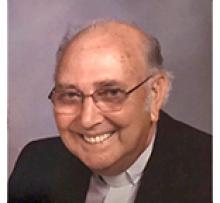 Ralph Esdale Baxter died peacefully at his home on Friday, November 27, 2020.
Ralph was born in Belfast, Northern Ireland on February 8, 1932. He attended the Royal Belfast Academical Institution, and after graduation worked for a brief time with an insurance company. He found his true vocation when he was ordained to the Anglican Ministry in July 1962. He served in several Church of Ireland parishes including St. John's Orangefield, Donaghcloney and Kilnasoolagh. In 1974, he participated in an early peacekeeping initiative when he, and seven other clerics, met with the IRA leadership at Feakle, Co Clare, Ireland in an effort to bring the intense bloodshed of the 1970s to an end.
Ralph married Eileen in 1957, and together with their two daughters, moved to Winnipeg, Canada in May 1975. On arrival in Manitoba, the parishes of St. Anne's and St. Catherine's warmly welcomed Ralph and his family. After six years with River North, he moved to St. John's College, University of Manitoba, where he taught homiletics and was an author and editor of the report Elders and Ministry. During this time, he served as chaplain at St. John's College, and later was appointed as the interim priest at St. George's Crescentwood. He was also one of the cofounders of Rupert's Land Respite Care which is still in operation today. In 1991, Ralph became the Dean of St. John's Anglican Cathedral, where he served until his retirement in 1996. After retirement, he returned to the parish of St. George's Crescentwood as an Honorary Assistant. He was awarded an Honorary Doctorate degree from St. John's College, and was the recipient of the 125th Anniversary of the Confederation Medal.
Ralph was deeply committed to his family and friends. He loved music, painting, walks along the beaches at Crawfordsburn and Roundstone, Ireland, a round of golf with friends, and always enjoyed spending time with his grandchildren. In his retirement, Ralph and Eileen loved to travel with friends and family.
Ralph will be remembered as a kind, generous and humble man. A peacemaker. He had a great sense of humour, was fun loving, and always had a twinkle in his eye.
Ralph was deeply loved by his beloved wife Eileen; his daughters, Heather and Catherine; sons-in-law, Tom and Mark; grandchildren, Kevin and his wife Kaitlin, Liam, Meghan and Laura; his brother Ivan; brother-in-law Hugh; sisters-in-law, Heather and Joan; nieces, nephews, cousins and many friends in Canada and abroad.
The family would like to thank the home care workers who came daily to provide support and care to Ralph over the past six years.
Due to COVID-19 restrictions, a small family funeral service was held at St. George's Crescentwood on December 2, 2020.
In lieu of flowers, donations may be made to the charity of your choice.

Ralph, you will be in our hearts always. Peace be with you.