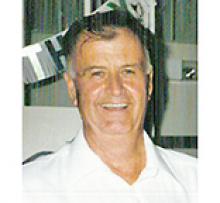 Ernest Edward Madill (Ernie or "Big Ern") passed away on December 8, 2020, at the Teulon Hospital, at the age of 94. His loving wife, Kay preceded him by eight days. That was the longest they had been apart in over 67 years.
Ernie was the youngest of three children born to Art and Gertie Madill. Gone, but not forgotten are sister Edith (Murray Johnson) and brother Robert (Irene). He leaves to cherish his memory, daughter Laura, son-in-law Ken Humbert and grandchildren, Kim (Robert) and Cory (Lori) and soon-to-be great-grandson. He also leaves a number of special nieces and nephew whom he loved dearly. They were always there for him.
Ernie was active in sports, cadets and 4-H while attending school in Teulon. He started out on his own in 1946, operating a hatchery in Saskatoon for a year. He then joined the McCabe Grain Co., buying forage seed in Manitoba, Saskatchewan and Alberta for the next six years.
Ernie and Kay (Arnason) married in 1953 and daughter Laura was born in 1954. Ernie farmed land on the bog for a while until purchasing a farm along PR 415 west of Teulon in 1961. That farm remained their home until 2008 when they moved into Crescent Creek Park. He farmed and also operated the local BA Oil facility Teulon. The farm land was rented out as they enjoyed retirement.
Ernie was bigger than life, literally. He loved everything nature; the grain fields, the trees, the gardens, the birds, the animals, the sun and even the weeds. He knew the name of every weed and even took Kay out hand picking the invasive Red Bartsia in the adjacent field. He broke his ankle at age 87 while digging up brown eyed susans in the ditch to save them. He knew what bird was at the feeder and enjoyed watching them from his window at Teulon Hospital.
Ern loved socializing and probably had his name on a chair at the local pub. He always reminisced about his buddies there and all the fun they had.
Music was a big part of his life. He was never apart from his cherished violin and played a mean harmonica. Just a week before his death, he entertained his fellow residents and staff at the hospital. His only regret was that there was never anyone to play along with. He missed "Willy and the Boys" and the Penners. Mallory's guitar was a bright spot in his day.
Ernie collected stuff; especially clocks, watches, coins and stamps. He "gathered" many relics and items of interest. He could pack a box full like no one else. Everything was neatly stored and labelled.
He was extremely proud of his family. Kay and Laura were his world and later son-in-law Ken and grandkids, Kim and Cory. The kids were often welcome guests at Kuzik's shack, meeting many of Teulon's characters.
Ernie and Kay spent time curling, golfing and bowling. They met many wonderful friends while doing so.
In later years, as a move off the farm became necessary, they enjoyed their life at Crescent Creek Park, with friendly neighbours at their beck and call. Ernie, at 6'5" tall, was especially popular for helping trim the taller shrubs and trees.
Ernie was thrifty, no doubt, yet generous to a fault to his family. He never spent a cent on new pants, shopped for the cheap tomatoes at Walmart, and we learned that his favourite gift was some old thing he could fix.
He never said a bad word about anyone and loved a good debate or a friendly visit. Thanks to all those who stopped by to chat, sing a song with them or see how they were doing.
Thank you to Dr. Loudon and all the wonderful staff at the Teulon Hospital. Your care and respect for privacy and dignity was appreciated more than you know.
Due to Covid restrictions, there will be no funeral but when permitted we will celebrate the life of Ernie Madill with some fiddle music and some stories about the good old days.
Donations in Ernie's memory may be made to the Teulon Healthcare Foundation Inc., Box 312, Teulon, MB R0C 3B0.