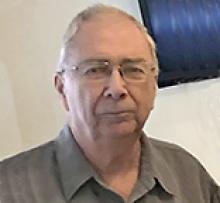 Keith Peter Walls was taken from us
suddenly on Sunday, December 6, 2020, while at home due to natural causes. He had just celebrated his 67th birthday.
Keith was born in Deloraine, Manitoba on December 4, 1953 to Mary and Alan Walls. He was the fourth of seven children. His
formative years were spent in various small towns in Southwestern Manitoba and Southeastern Saskatchewan. After a brief stint in Winnipeg, the family settled in Teulon, Manitoba; where Keith attended high school at Teulon Collegiate and met his future wife Christine. They settled in Komarno where they raised their family.
Keith was a fighter and a survivor who showed great strength and determination overcoming many significant health
challenges including major heart surgery and being a two-time cancer survivor
(overcoming Hodgkin's lymphoma when he was in his 30's and lung cancer in his 60's).
Despite dealing with ongoing health issues Keith never complained and never let it get him down. He refused to be a victim of his circumstances. His strength and
determination shone most brightly during his second bout with cancer, where he amazed
family, friends and co-workers by
maintaining his busy life, including
continuing to work at his job as a Contractor Service Specialist at Rona; completing two major house renovations and flips; helping
family members with various home
improvement projects; and travelling outside and across the country.
Keith's greatest joy was spending time with his children and grandchildren. One of his true passions was reading. He was an avid reader who enjoyed many genres of books; history, action adventure, biographies and mystery. Many hours were spent with the works of Tom Clancy and Louis L'Amour. He also enjoyed travel, spending time on the
water, and being with family and friends. Like his father, he was a bit of a history buff and his travel plans usually included stops at museums and historical sites; although he also enjoyed winter getaways to tropical
places with his good friends, Mike and
Cynthia. Also like his father, he had that prairie boy passion for the water - as a youth he spent his summers on the water at Devil's Lake, and then Moosomin Lake; as a teen he joined the Sea Cadets; and as an adult, he spent many weekends with his brother Craig on his houseboat, fishing on Lake of the Woods. He also did several sailing trips with his brother Richard, including an infamous trip from New York to Chesapeake Bay that found them in New York harbour on 9-11. They were the first sailboat to pass the twin towers after the waterways re-opened.
Keith was involved in helping the less
fortunate in Winnipeg. He helped his brother Richard found the Red Road Lodge, and served on the first board of directors. He
frequently hired those that others wouldn't, the marginalized, to work on his many
projects - showing trust and confidence in them; and helping them gain / regain their self-esteem as well as work experience and useful, marketable skills.
Keith's talents were working with his hands - he could build anything. He was self-employed as a contractor doing home
improvement projects and renovations for many years before joining Rona, where his knowledge and experience made him the "go-to" guy with contractors for estimating and pricing projects. His talents were also
deployed for the benefit of the family, when he acted as the project manager, and was
actively involved in construction of the
family residences on Scott St. in Winnipeg.
Unfortunately, cancer is a difficult beast to best and his on-going battle with it came at a cost. Keith suffered significant lung damage and other health issues as a result of his
cancer treatments which ultimately impacted his quality of life, limiting his mobility and making it difficult to continue his to work or travel. Never one to give up – he took on new challenges, including cooking, where he
established himself as an accomplished cook.
Keith is survived by his children, Daniel (Teresa) Walls and Alanna (Shaun) Smart; his grandchildren, Matthew, Jordan, Ava and Drew; his ex-wife Christine Walls (Pidruchny), his sisters, Noreen (Glen Yablecki), Janice (Darcy Briggs), Norma (Vin Anania) and brothers, Richard (Pat) Walls, Bruce (Karen) Walls.
He is predeceased by his father Alan,
mother Mary, and brother Craig.
He was a wonderful father, a great brother and a dear friend who will be missed by all.
Due to the current Covid 19 restrictions in Manitoba a memorial will be planned for
family and friends at a future date.
In lieu of flowers, a donation may be made to the Canadian Cancer Society, The Heart and Stroke Foundation, or the Red Road Lodge 631 Main Street.
Family invite friends to sign the online book of condolences at ejcoutu.ca