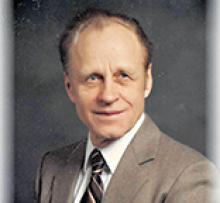 On Saturday, November 28, 2020, with his family by his side, Alex Turchyn passed peacefully at the age of 95.
Alex will be lovingly remembered by his wife of 73 years, Verna, daughter Marlene, who rarely left his side in his final days, son-in-law Leo Kozak, three grandsons, Jeff (Maria), Derek (Candace) and Evan (Rebekah), and great-grandchildren, Aidan and Kaylee. He is survived by one aunt Jean Bilan, sister-in-law Sally Turchyn, and many cousins, nieces and nephews.
He was predeceased by his parents, Peter and Mary, brother Mike, sister Ann and brother-in-law Walter Kupiak, niece Diane Bannerman and his infant son Ronnie, as well as countless friends and relatives. He will no doubt be reunited with his special neighbour and guardian angel Dan, who saved his life more than once.
Alex was born in Birch River, where he spent his early years helping on the family farm. As a young man, he went to Red Lake, Ontario to work in the mines before eventually moving to Winnipeg. He took a job at Shore Glass as a machine operator, where he worked for the next 40 years until his retirement. As an avid football fan, he found the perfect fit working for Winnipeg Enterprises where he could get paid to watch every Blue Bomber home game. This later included countless Jets games, concerts and other events.
He took great pride in building things with his hands, progressing from small items such as coffee tables to larger and larger items, eventually building his own home. Alex enjoyed listening to Ukrainian music, dancing, playing the violin and watching pro wrestling on television. He will be remembered as a kind and generous, hardworking man who loved his family and was always there to support them.
The family wishes to thank the staff at Health Sciences Centre RR6 for the compassion, kindness and tender care shown towards Alex, making his final days as comfortable as possible.
Due to Covid-19 restrictions, a private service took place on December 4, 2020. He was interred at Glen Eden Funeral Home & Cemetery.
Donations in Alex's name can be made to a charity of your choosing.