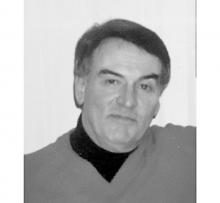 Russell Simmonds passed away peacefully on the morning of November 29, 2020, with family at his side.
His three sons, Russell (Sarah), James, and Patrick (Michelle) will greatly miss him, as well as his sister Christine, and close friends who have shown great compassion and commitment over the years. He is also survived by his son, Cade, from a previous marriage. Russell was predeceased by his wife Madeleine, and brother Gary. This past September saw the birth of his first grandchild, little Olivia, of whom he was incredibly proud, and brought him great joy.
Russell grew up predominantly in Winnipeg and left home young to establish himself. His early years were colourful when recounted; filled with stories of hitchhiking as a teenager across Canada, a stint training to become a pilot with the RCAF, and acting in the local Winnipeg theatre scene. He chose to stay in the prairies and often reflected on the beauty of the endless wheat fields and the possibility this landscape suggests.
He put himself through university, obtaining a Psychology degree from the University of Winnipeg, and while an employee at the City of Winnipeg, was offered a bursary which allowed him to attain a Masters of Social Work degree from the University of Manitoba. Most of his career was spent at the City of Winnipeg, eventually becoming the Director of Social Services, and was rightfully proud of what he accomplished. He exhibited thinking in that role regarding the relationship of work, education, and welfare that was ahead of its time. Retirement did not suit him and he returned to work, this time with the Liberal Party as a Special Assistant to the Minister of Foreign Affairs, where he embraced new challenges, with one of his most cherished roles being a postwar election observer in Kosovo. Ultimately he ended his work career to tend to his wife of thirty years and her terminal illness, and then endeavoured to fill the vacuum her loss left in the family.
He will be remembered by his sons as an inspiring man of character, who was supportive of them yet quick to offer his dry wit, an intellectual and avid reader, and as a snappy dresser who loved a proper meal and drink. His legacy will continue in his sons with the values he and Madeleine instilled in them.
The family would also like to thank Heide and Robyn, whose tremendous help allowed him to remain in his own house, and were great companions and support to Russell.
A service will be held in the spring.
In lieu of flowers, please make a donation to the Michael J. Fox Foundation for Parkinson's Research or Parkinson Canada.