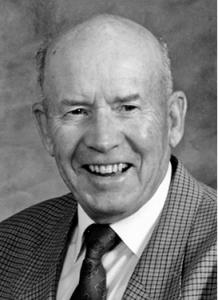 JONES: Joseph "Reginald" Jones. It is with heavy hearts that we announce the passing of our beloved husband, father, grandfather and great grandfather. Reg was born March 14, 1922 and passed away December 17, 2020. He is survived by his wife Grace, of 63 years, his son Bruce (Trudy), grandchildren Ian (Cheryl), Shelby (Justin), Rebekah (Steve), son Ron (Jacquie), grandchildren Danielle (Bryan), Reese and Jesse, daughter Susan (Bruce), grandchildren Isaac and Lisa, daughter Kathleen (Gene) as well as seven great grandchildren. Reg is also survived by his sister Thelma Grasby and sisters-in-law Peggy Jones and Gladys Welbourne. Reg was predeceased by his sisters Audrey Nassachuk, Gwen Briggs and Edna Hammond, brothers Lewis and Frank. Reg was the third child and eldest son of the late Joseph and Gwendolyn Jones. He received his schooling at Brookdale and farmed in the area until moving to Brandon on May 9, 1997. At one time, Reg was a school trustee, was on the Board of Stewards for the Brookdale United Church and on the local board of the Pool elevator. Reg and Grace spent 25 winters in Mesa, Arizona from 1987 to 2013 and formed many friends and acquaintances. The last few months of his life were spent at Rideau Park Personal Care Home. The family would like to thank the numerous staff members for their compassionate care and support. Due to COVID-19 restrictions a small family service will be held. The family invites you to view the Celebration of Reg's Life remotely on Saturday, January 2, 2020 at 1:00 p.m. – a link will appear approximately 5 minutes prior to the service on Reg's memorial page at www.memorieschapel.com. Donations in memory of Reg may be made to a charity of choice.