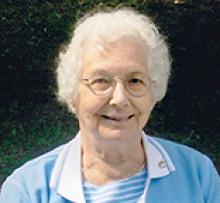 It is with sadness that the family of Marg announce her death on December 11, 2020. She was predeceased by her husband Bob, in 2000.
Mom will be missed by son Allan (Katherine), Justin and Cody; daughter Maureen (Earl) Slimmon, Cameron, Meaghan, and Kyle.
Marg grew up in Winnipeg and graduated from the U of M in Education in 1953. She married Bob that summer. They both taught High School in Dryden, Dauphin and Thompson. She continued to sub in Lac du Bonnet and Beausejour. While living in Beausejour, they built a cottage at Karklins Kreek near Lac du Bonnet and enjoyed many years. After leaving Beausejour, they built a new home on the Winnipeg River (L.D.B.), they soon realized that travelling was becoming their passion. With winters spent in Texas, they also travelled many of the States, Canada and England. "Happy Hour" was never far away from their friends of the "Sunny Sams." In 1992 they moved to Stonewall and after Bobs death in 2000, Mom continued her travels to Portugal, Spain and Malta.
Besides being teacher, wife and mother, Margaret's accomplishments were many. To name a few, she started the Thompson Library, she was a board member that enacted the Brokenhead Regional Library in Beausejour, she was very involved in the Women's Institute which promotes women in rural areas, she was past president and while living in LDB and Beausejour, she sat on the Provincial Board and held a life time membership. She was an original member of Winnipeg's "Search for Talent," designed to make rural Manitobans feel they were part of Winnipeg Centennial.
If friends so desire, donations in Marg's memory may be made to the Children's Wish Foundation.
The family would like to thank the staff who attended to Mom in her final days at the River East Personal Care Home.
Cremation has taken place. A Celebration of Life for Margaret will be held at a later date.