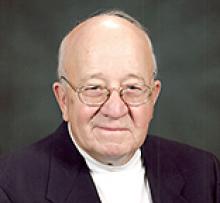 On December 15, 2020, Joe Fredette, beloved husband, father, grandfather, great-grandfather and brother passed away at the age of 90. Joe was born in Saint Boniface, Manitoba on July 20, 1930. He was the seventh of ten children.
He was preceded in death by his first wife Carol (nee Joy); his parents, Josaphat and Dorothée (Laroche) Fredette; his brothers, Lucien (Alice), Paul (Fern) and Victor (Yvonne); his sisters, Bertha (Jim) Wilson, Cécile (Gustave) Bergeron, Annette (Garth, Wayne) Tencha-Hamel and two nephews, Blake Fredette and John Ellison.
He is survived by his wife and partner Astrid; his two sons, Michael (Brenda Antonation) and Gregory (Nora Nordin); grandchildren and great-grandchildren, Charlene (Michael) Kaminski (Isabelle and Aidan); Jason (Lindsey) Fredette (Theodore); Tyler (Amanda) Fredette; Leanne Fredette; Samantha Fredette and Emily Fredette; and stepchildren, Janine Arnaud-Kamenz (Kent) (Justin and Brandon) and Marc Arnaud. Also left to cherish his memory are his sisters, Denise Fredette; Louise (Eric) Ellison and Ida (Aimé) Savoie; sister-in-law Marguerite Fredette; and many nephews and nieces.
Joe was with the Winnipeg Police Department as a detective in the field of interrogation, fraud and homicide. After twenty years, Joe made a career change and worked for the Federal Government of Canada, Bureau of Competition Policy, as Regional Manager investigating white collar crime. After retiring in 1993, he taught evening courses in Communications, at Red River Community College.
He was a member of Toastmasters International and became a District Governor. Joe loved hockey and was an avid fan who faithfully followed all of his grandchildren's games. Joe was very proud to be a member of the Knights of Columbus, Saints-Martyrs-Canadiens.
His journey on earth is over and he has crossed over to be with his God.
Rest in peace Joe, you will be forever in our hearts.
Cremation has taken place. Due to COVID 19, a celebration of his life will be held at a later date.