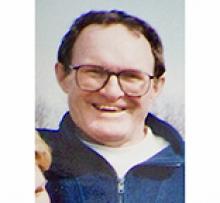 Chris Samuel, beloved husband of Lynne Samuel, died December 10, 2020, in Winnipeg. Born in Yorkshire, UK on June 24, 1940 he was the son of Rev. Ieuan Samuel and Esther Samuel (nee Hughes).
After earning a degree in Agriculture, Chris came to Canada seeking adventure in 1964, and became a proud Canadian citizen in 1968. He lived briefly in Vancouver before moving to Winnipeg, where he worked for the Richardson family's stock farm before joining Air Canada in 1965. He was employed there until his retirement in 2005.
Chris and Lynne were married in Winnipeg October 4, 1968, and celebrated 52 years of happy life together.
Chris was a kind gentleman with a wonderful British sense of humour and was an avid reader and puzzle solver. He was active with the Canadian Kennel Club, always at ringside to assist Lynne showing her dogs and volunteered with the Prairie Toy Breed Association, the Assiniboine Kennel Club and the Windchimes Greyhound Rescue.
He will be missed and fondly remembered by Lynne; his brother Nicholas and family in England, and long time friends Bob and Betty Poole, Pat Smith, Marion Zerrenthin and Allan Webb.
Donations in Chris' memory may be made to the Winnipeg Humane Society.