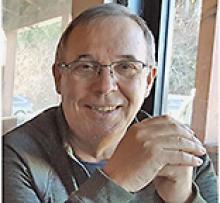 We are devastated to say goodbye to son, husband, father, big brother, uncle, and friend on December 10, 2020, after an unexpected complication from surgery. Bob was 66 years old.
Especially mourning his loss are wife of 44 years, Margaret; daughter, Leah, and son-in-law, Geoff Roth, with daughter, Lillian; son, Rob, and daughter-in-law, Amber, with children Jazmyne, Hayden, and Jordyn; mother, Erna; siblings, Carol Fehr (Wayne), Tom Sullivan (Pamela), Maureen Sutherland (Grant); Barbara Backland (Leon), Colleen Snyder (Tom) and Joan Halayko (Paul); brother- and sister-in-law Jim and Anne Trick; close cousins, Pam (Ross) Eagleton and Randy (Catherine) Bruce; numerous nieces, nephews and their children; and close friends who were like his family. He was recently predeceased by his father, Robert Sr.
Bob had a great childhood and loved being part of a large family. Perhaps it was here that his love of storytelling began, as he had many tales of running wild with the neighbourhood kids on Barton Avenue, the amount of tomato soup that he and his six siblings could consume at lunchtime, and the trials and tribulations of his teenaged sisters. Two other loves began here, too: the love of lake time and the love of work. Family time at Camp Morton, then at Dorothy Lake and Lake of the Woods spawned a lot more stories, and in his adult life, the years spent at Falcon Lake with Margaret and the kids on his Edson boat were some of his happiest. In the last two years, he and Margaret purchased a trailer at White Spruce on the Lake, just down from Leah, Geoff and Lily, and were delighted to get back to lake life.
His love of working started young with a job delivering prescriptions for Glow's Pharmacy on his bike. Paper routes led to working with his dad at the family business, a Texaco Station at Donald and Ellice. He was an air cadet with 170 Squadron, and then a reservist with 402 Air Reserve Squadron, where he met Margaret. After high school he applied to be a cadet with the Winnipeg Police Department. He was hired on December 17, 1973 and said many times that he had won the lottery that day. He loved being a cop and worked in many divisions, including general patrol in every district, plain clothes, internal, and was the Sergeant of the Airport unit from 2001 to 2006, where he was introduced to another lifelong passion, golf. After 35 years with WPS, he was hired by CATSA in 2008, and worked as one of managers of screening operations for nearly ten years, and is remembered for forming the Breakfast Club with co-workers on weekend mornings. All through his working life, he most enjoyed cultivating friendships. Camaraderie came naturally to Bob, and his work life provided enormous grist for his storytelling mill.
His love of family was his best love, and he and Margaret married in 1976. They were delighted to welcome Leah and then Rob, and in the midst of shift work, home renovations, and school board meetings, always treasured their time at Falcon Lake. In 1991 the family moved to Stonewall, where they lived for nearly 20 years. Bob immediately connected with the community, and joined the Knights of Columbus, where he was introduced to curling, both activities remaining important to him all his life. Bob was involved in Rob's Scouting and Air Cadet activities on the parents' councils, and spent numerous hours driving both he and Leah to their activities, and encouraging them to discover their passions. He was so proud of the people they had become, and loved their partners and their children.
Bob loved to drive, and the family took many road trips in Canada and the States. He had a built-in GPS and could pretty well always explain the best route to get somewhere, including knowing the cross-streets. For places where he hadn't been before on trips, he relied on navigator Margaret, who sometimes fell asleep during critical times. According to Bob, she and the kids all missed some "great countryside" and sometimes "even wildlife" because of napping - perhaps more storytelling? He always said that he couldn't imagine not being able to drive.
Bob enjoyed travelling even if he wasn't driving, and many trips and cruises were taken with Margaret, the kids, mother-in-law Helen, and Jim and Anne. The "amoeba's" adventures became part of his repertoire. He and Margaret were fortunate enough to see some great places, and he thoroughly enjoyed all of those experiences. Of the many places he had been, Bob kept a special part of his heart for Vancouver Island. He loved being there, and retirement allowed him to spend a couple of months there each winter. He looked forward to hosting friends and family, hiking with Jim, exploring, and playing winter golf. He said he loved how the Island smelled.
Retirement also allowed Bob time to join curling and golf leagues, continue with the Knights and condo board activities, and begin volunteering at the WPS Museum, where he and other cops could swap stories. He enjoyed touring the public through all the displays once he got over the fact that most of the museum pieces he had actually used in his career.
Bob was the kind of man who enjoyed whatever and whoever he turned his mind to, and made lifelong friends while doing so. He will be missed in many circles besides his family.
The family is grateful for the care provided by Drs. Kazina, Gillman and Siddiqui, and the wonderful ICU nurses Bob was blessed in having. Thank you to all who have shared memories and your own stories of Bob.
A Celebration of Life will take place when we can once again gather and celebrate a man who wouldn't have changed his life at all, except to have a bit more time.
In lieu of flowers, please consider a donation to the Winnipeg Police Museum and Historical Society, or to a charity of your choice.