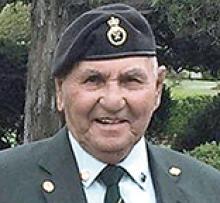 It is with deep sadness that we announce the passing of Doug Jones at 90 years on Sunday, December 13, 2020.
He was a loved husband, father, father-in-law, grandfather, brother, brother-in-law, uncle, cousin and friend.
Left to mourn is his loving wife, Anita; children, Darlene, Gord (Kareena), and Leroy (Isabel); grandkids, Amanda, Mitchel, Ashley, Kayla, Mackenzie, Gabrielle, Peggy and Brittany; and great-grandchildren. Also left to mourn is his brother Stan, cousins, nephews and nieces.
He was predeceased by his father, William C. Jones, his mother, Mary Desjardins, his siblings Evian, Edna, Olive, Leonard, Mel, Willis, Norma, Wilier and Donald.
Doug enlisted in the Canadian Army in 1950, and in 1951 fought in the Battle of Kapyong in the Korean War. He was one of the 700 men of the Second Battalion Princess Patricia's Canadian Light Infantry that successfully conducted their mission. He was the KVA Unit 17 2nd Vice-President in Shilo, MB.
After some years back from war, he started what became his passion, training horses for numerous race tracks around Canada. He often enjoyed playing games of dominos and cards with family and friends, where he was constantly joking and making everybody laugh and have a real good time.
Donation in his memories may be made to the PPCLI fund or the PPCLI Foundation, which are registered charities that support veterans. Donation info can be found online at https://ppclifoundation.ca/donate-now/.
Cremation has taken place and a graveside service will take place in the military section of the Brandon Cemetery at a later date.
Condolences may be left on Doug's memorial page at www.interlakecremation.ca.