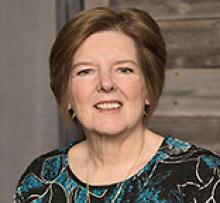 After a brief and courageous battle with an incurable brain cancer, Janet passed away at the age of 61.
She is survived by her sister, Susan (Blixhavn), brother-in-law, Gerry Blixhavn: father, Bill McGuire and his second wife, Donna Price, and many extended family members and wonderful friends.
She was predeceased by her husband, Paul LaForest, on March 23, 2010, her mother, Arlie (Woods) McGuire, on November 15, 1999, and both sets of grandparents.
After graduating grade 12 from the Pine Falls Collegiate Institute in Pine Falls, Manitoba, Janet moved to the McGuire cottage in Killarney. She worked there for a year, before moving into Winnipeg to try out city life. Janet began working for the Canadian Red Cross Society (CRCS) in May 1978, as a clinic assistant, travelling around Manitoba and northwestern Ontario, collecting donor blood for transfusion. What was intended to be a few years' stop gap before going to college, turned into a 40-year, full-time career with the blood transfusion service - 20 years with CRCS and then 20 years with CBS, when the blood transfusion service in Canada (except Quebec) was transferred to the newly created Canadian Blood Services organization. After 12 years travelling with the blood collection team, Janet moved into an office job within CRCS. She progressed through several secretarial and administrative positions, while also completing evening and weekend courses at the University of Manitoba. She completed the U of M certificate program for Human Resources Management in 2002, which helped her advance into a supervisory management role in 2008. Janet retired from CBS on June 30, 2018, after celebrating her 40th anniversary with CRCS/CBS.
Janet met her husband, Paul LaForest, in July 1990, and they were married on May 16, 1992 in the chapel at the International Peace Garden. They enjoyed 18 years of married life before Paul passed away at the age of 52, with congestive heart failure due to heart arrhythmia problems. To their regret, they were not blessed with children during their marriage.
Anxious to leave the city living behind, Janet moved back to Killarney after retiring. She spent her first year of retirement re-establishing old friendships, meeting new people, renovating her new home, and volunteering at the Heritage Home of the Arts, before receiving a cancerous brain tumour diagnosis on June 10, 2019.
A memorial service has taken place at the Wheatland Chapel in Killarney on December 23, 2020. Cremation has taken place, and Janet's remains will be interred in the Killarney Cemetery in the Green/Woods/ McGuire family plot, next to her husband.
in lieu of flowers, please donate to an animal rescue group of your choosing, or donate to CancerCare Manitoba in support of brain tumour research.
Messages of condolences may be made online at www.wheatlandfs.com