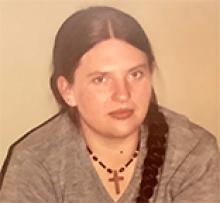 Angela Stefishen, Daughter, Sister, Mother, Grandma, Baba Ange to the great-grandchildren, Aunt, Cousin and Friend to many, passed away on Wednesday, December 23, 2020, at the age of 63 years.
Angela caught the travel and adventure bug at a very early age. She has travelled from coast to coast, far north to the deep south.
Angela has called Winnipeg, St. Johns, Newfoundland, and Churchill home. However, her true, one and only home is Winnipegosis. To Angela family was the most important thing in her life.
She bought her first house on the land her grandparents had owned. Angela was truly a "Jackie" of all trades. She was a resourceful woman who dedicated herself to everything she took on, she would never back down from a challenge. Angela worked with home care, as a jail guard and was dedicated as a counsellor in Mossey River.
Angela had a great sense of humour. Everyone remembers the "Ukrainian vacuum" she once gave as a housewarming gift. She made that vacuum by duct taping a cord to a mop and she even presented it in a vacuum box! Angela was also known for her "Stefishen Kissers", deep fried sucker/carp lips! Angela was on the lake cutting the lips off the fish. She said it was shrimp. She was a very funny lady!
Angela's love of family was showcased during celebrations of her Canadian and Ukrainian traditions. Family gathered and there was always lots of food, fun and laughter!
Angela was a generous, and giving person, she always had something handy to give when needed, she was quite the "MacGyver"! Angela loved to visit, she never stayed long but her visits were always "short but sweet", like her.
In accordance with Angela's wishes cremation has taken place, and a service will be held at a later date.
Donations in Angela's memory may be made to the Autism Society Manitoba, 825 Sherbrook St., Winnipeg, MB R3A 1M5.
Angela has joined her father John, brother Emil, great-granddaughter Amirah, and all the other relatives that passed before her, they will all be watching over us from Heaven.
Angela will be immensely missed by her mother Betsy, sister Amelia, brother-in-law Wayne, brother Xander, sister-in-law Bonnie, daughter Alexandria, granddaughter Alexis, and great-grandchildren, Kingston, Kassius and Aryah.
Angela cherished them all, and her memory will live on in each and everyone of them.