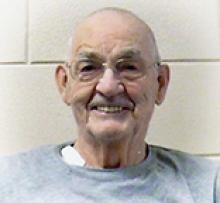 It is with great sadness we announce the passing of Ronald Joseph Baier, beloved husband of Carole Baier (nee Farrier), at the Poseidon Care Home in early evening of December 26, 2020.
Ron was born in Winnipeg on July 31, 1932 of Volga German immigrants. He worked as a tool and die maker at James B Carter and then Temro until retiring in 1997. He was predeceased by his parents and wife of 63 years.
He is survived by his children, John Baier (Tina), Lori Gaboury (Richard), Kerry Hamrick (Doug); his six grandchildren, Kristjan Jensen-Baier, Anders Jensen-Baier, Soren Jensen-Baier, Shawna Eng (David), Ashley Gaboury (Geoff), Jillian Hamrick; four great-grandchildren, Dawson Eng, Gabriella Eng, Athena Eng and Cyrus Josef Banjavich, as well as numerous nieces and nephews.
As per his wishes, there will be no funeral service. A private interment will occur at Elmwood Cemetery at a later date.
In lieu of flowers, contributions can be made to Heart and Stroke Foundation of Manitoba.