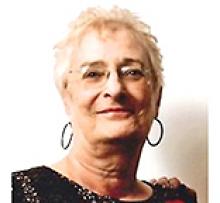 Suddenly on the morning of December 24, 2020, Joan collapsed into the arms of her loving husband Lionel while trying to dress for the day. After an attempt by Lionel and emergency medical response units, Joan was transferred to St. Boniface Hospital where she passed away at the age of 80 years.
Joan was born to parents, Nettie and John Belasco on July 30, 1940. She a was a war baby, born in Winnipeg. Later she was joined by a sister Patsy and two brothers, John and Bob "Robert".
Joan was educated in Winnipeg at William Whyte and Issac Newton Schools. She was raised and lived in the North End and where she met her husband Lionel Baryluk. Before their marriage at Sts. Vladimir & Olga Cathedral, Joan worked for Pool Western Elevators and Dairy Dell with her mom.
After raising her family, Joan later worked at Revenue Canada for 20 years where she met and enjoyed many great friendships to this day. She commuted to work from Chalet Beach at Matlock, MB for many years where she also enjoyed some great friendships. When Lionel retired from C.N.R., Joan also retired and they travelled to other parts of Canada; Comox, BC for 10 winters and Mexico. Joan loved to host large family events and was a true Matriarch, loved by all.
Joan was predeceased by her parents, John and Nettie Belasco (nee Boroske), infant daughter Liza, brother Bob, brother-in-law Allan, and stepmother Anne Procopchuk.
Left to mourn her passing are her children: Kim (Darren), Tracy (Sean), Nick, Tina; sister Patsy, brother John, sister-in-law Darlene; granddaughter Stephanie and great-grandson Elias. She also leaves behind numerous in-laws, nieces, nephews and their families and lifelong friends.
A celebration of her life will be announced at a later date.