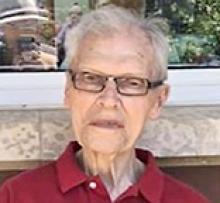 Leo Driedger passed away peacefully at Riverview Health Centre in Winnipeg on December 28, 2020. He was 92. He leaves his daughter, Diane Driedger (Gerry Agostini), son, Dale Driedger (Jodian Self) and two grandchildren, Jay-Ar and Annika. His wife of 62 years, Darlene, passed away in 2018.
Leo was born June 27, 1928, in Saskatoon, Saskatchewan and grew up on a farm in Osler, the oldest of seven children. Leo was a self-described "high school dropout" who after shovelling manure for three years in his late teens, returned to school to complete five degrees, including an MA from the University of Chicago, the birthplace of Sociology, and a PhD from Michigan State University in Sociology. Leo met Darlene Koehn, at Bethel College in Newton, Kansas and they were later married in Chicago, in 1956, where they both were doing studies at the Associated Mennonite Biblical Seminaries. They had two children, Diane and Dale. Leo was committed to a life of service to the community, and the Mennonite church and was a member of the Charleswood Mennonite Church in Winnipeg for many years.
He taught Sociology at the University of Manitoba for almost 35 years, which he always told his students, was "the study of the obvious". From students' reports over the years, he was a dynamic and interesting teacher. He published 19 books on ethnicity, urban sociology and Mennonites in Canada. He finished his 20th book, a memoir, this year, which is forthcoming. Leo became the first Professor Emeritus in the Department of Sociology at the University of Manitoba. He was a Fellow of the Royal Society of Canada. In his later years, he was invited twice to the Oxford Round Table conference that brings together people from various walks of life to discuss social policy issues.
Leo was always curious and a life-long learner. He taught his children Diane and Dale that one could always ask questions, find out more information (research) and work to understand people much different than themselves. While doing this, one needed to be committed to working hard. Leo was an explorer who looked into his family history, his Mennonite people's beliefs and history. He visited 140 countries in his travels, many with his children and wife Darlene. When the communist block fell in the late 1980s, breaking up the Soviet Union, he lamented that "they are making countries faster than I can visit them." Leo always took the "participant-observer" approach to a new place, walking its streets, talking to the people he met, asking questions.
Before completing his PhD, Leo served as Associate Secretary of the newly founded Board of Christian Service of the General Conference Mennonite Church in the early 1960s. It was during this time, that he appeared on a panel with Martin Luther King Jr. at a meeting of the Southern Christian Leadership Conference. He was also on the board of the Mennonite Central Committee Canada and shepherded MCC while it built its new wheelchair accessible building on Plaza Drive in Winnipeg in the mid-1980s.
Growing up, his children, Diane and Dale, experienced many suppers eaten together as a family, where many social, political, and of course, sports issues, were discussed. Leo asked many questions, and his children asked him questions. His children, and later on, his grandchildren, learned that the world was interesting, that people were interesting and that there was always more to learn.
Leo enjoyed being a grandfather to Jay-Ar and Annika. He constructed a "museum" of artifacts in his back yard and took young Jay-Ar on a tour every time Jay-Ar visited. Leo knew that Jay-Ar loved going to museums, such as the Manitoba Children's Museum. Leo faithfully attended their football games, following his grandchildren from the sidelines, as their teams marched down the field. His "Driedger, Driedger" cheer was heard far and wide. He was proud that granddaughter, Annika played in the first girls football league in North America.
Over the last 13 years, Leo enjoyed his life with his wife, Darlene, in assisted living at Lindenwoods Manor in Winnipeg. He sang in a quartet called the "Lindenwoods Nightingales", returning to one of the loves of his life -singing - which he had done in his early adulthood while attending church meetings, the Rosthern Junior college and the newly founded Canadian Mennonite Bible College in the 1950s. Leo had many friends that he appreciated at the Manor, and he had many friends in his church and professional community over the years. He was sometimes a bit too blunt, but he called it as he saw it. He was always a man who said he would do something and did it. In fact, there was no time to waste.
A celebration of Leo's life will be held when we can all gather again.
Donatoins in Leo Driedger's honour can be made to the Mennonite Central Committee Canada, 134 Plaza Drive, Winnipeg, MB R3T 5K9