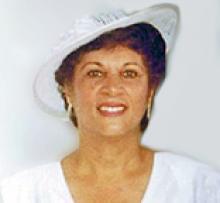 Jacqueline "Jacqui" Gomez-Burke (neé O'Brien), beloved sister, aunt and cousin, passed away peacefully on December 20, 2020, leaving behind her indelible imprint of love on our hearts.
Predeceased by her parents, Hugh and Isabella O'Brien; husband George and brother Jeffrey; she leaves to mourn her sister Andrea (Gordon); brother Calvin (Doreen); several nieces and nephews and many cousins, all of whom she adored. She will be remembered always, forever well-groomed and stylishly dressed, of gentle manner and infectious laughter.
Born in Port of Spain, Trinidad, Jacqui was the eldest child and proud big sister to her two brothers and one sister. She was fiercely protective of her younger siblings, both at school and at home. She sought fairness in all situations, often breaking up squabbles that arose between her brothers and interceding in parental disciplinary actions. She was always quick with kind words, supportive advice, and what Jacqui was well known for, her hugs.
Jacqui attended Bishop Anstey High School and later worked mainly in accounting and bookkeeping positions. She migrated to Canada first in the late 60s, returning to Trinidad to live periodically. On one of her trips back home, she reconnected with an old friend, George Gomez-Burke and they married in 1984. Finally finding love later in life, and with someone whose joyous spark matched her own, she experienced heartbreak after losing George to cancer in 1990. Jacqueline returned to Canada settling in Winnipeg in the early 1990s.
Along with her strong faith in God, music was a constant source of joy, whether it was singing calypsos at family gatherings with her musical brothers or dancing to "Macarena."
Her struggles in life did not dampen her incredible love of family. She remembered the birthdates, names, ages of family members and kept a book of accomplishments of all her nieces, nephews and cousins, of whom she was so proud.
The family is deeply grateful for those who helped during Jacqui's lifelong battle with mental illness, including friends who journeyed with her and faithfully visited when her own family was not able. Sincere thanks go out to the staff of Meadowood Manor and the First Floor Nurses Station for the many years of excellent and loving care Jacqueline received over the 12 and a half years she resided there.
Smaller private church services will be held by family to honour Jacqueline, and she will be laid to rest alongside her brother Jeffrey, who predeceased her earlier this year.
In lieu of flowers, donations may be made in Jacqueline's memory to the Schizophrenia Society of Canada (Winnipeg Chapter) or to Catholic Christian Outreach Canada Inc. (CCO Inc) 1247 Kilborn Place, Ottawa, ON K1H 6K9.