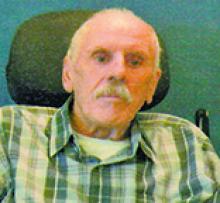 It is with great sadness we announce the passing of Robert Larocque at Park Manor Personal Care Home in the loving company of his wife and son after a brief illness.
Bob was born in Pinewood, ON. He began working for Canadian National Railway in 1964, retiring from Symington Yard in 1995 after 31 years of service. During that time he met Darlene Klepak in 1966, and the two were married on July 22, 1967. They welcomed their son Brad on December 7, 1975. In retirement, he kept busy working in the yard, with home repair projects, and watching hockey, baseball, and curling. He especially loved his dogs, and "Polka Party" on the radio on Saturday nights.
Bob is survived by his wife of 53 years Darlene; son Brad; grandchild Reece; sisters, Aline, Yolande (Albert), Lorraine (Rosaire), Lina (Lawrence), Angele; brother Noel (Elaine); brother-in-law Jim Donnelly; sister-in-law Beulah; as well as numerous nieces and nephews. He was predeceased by his parents, Ernest and Jeanne; sisters, Estelle, Florise, Rhea, Claire, Theresa, Fernande; and brother Roland; and daughter-in-law Shannon.
Special thank yous go to the staff at Park Manor and Cropo Funeral Chapel for their kindness and compassion shown to Bob, and his wife and son. Thank you to Father Gerry for his kind words of encouragement and presiding over Bob's funeral.
In lieu of flowers, donations can be made to Park Manor Personal Care Home, 301 Redonda St., Winnipeg, MB R2C 1L7.
Due to COVID-19, a private funeral will be held January 4, 2021.
The obituary can be viewed and funeral service will be streamed at cropo.com.