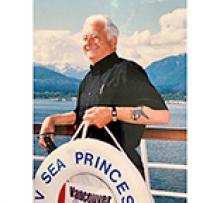 It is with heavy hearts that we announce the passing of our Father after a long battle with Alzheimer's and Covid-19.
Dad is survived by wife Yvonne and sons, Tony, Glenn (Debbie), Paul (Karen) and Gord (Jennifer). He was predeceased by his oldest son Christopher in 2005 and many grandkids.
Dad lived life to its fullest. Having only a mother (Emily Rolfe) who passed away very early on, and no other family, Dad joined the navy at a vey young age to explore the world. He met the love of his life Yvonne at a dance in Bournemouth and their journey began. Christopher was born in England in 1955. Wanting a better life, they travelled to Canada where dad found work at Air Canada for 35 years. Tony and Glenn were born in Winnipeg (1958 and 1961) but Mom was homesick and returned to England where Paul was born in 1964. A lack of work forced them to return to Winnipeg and Gordon was born in 1972.
Dad's passions were playing darts and dancing at the Legion. Dad represented Air Canada in many dart tournaments. Fishing and camping early on at Otter Falls and then at their trailer at Tall Timber Lodge are fond memories for all. Dad was also an avid soccer fan and notably Manchester United. Dad's greatest love however was his beautiful wife and his kids. His sense of humour, infectious smile and zest for life will be in our thoughts forever.

Rest in peace Dad, you set the bar very
high and we thank you for all of your love.
We all will miss you immensely.