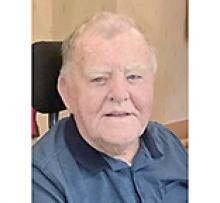 On Saturday, January 2, 2021, the Lord took home to Himself our dear father, grandfather, great-grandfather, and brother, Gerrit (Gerry) Kuik. Thankful for a long and blessed life and looking forward to being with his Saviour, Gerry died after a brief illness at the age of 96.
Gerry will be lovingly remembered by his children, Grietje Gortemaker, Davida Tuininga (Bruce), Henrietta Raap (Bill), Jake Kuik (Carolyn), Ben Kuik, and Anita Vanderveen (Allan); 40 grandchildren (and spouses); 95 great-grandchildren (and one spouse); sisters, Jannie Toet and Jenny Raap; brother Jacob Kuik (Rita); sisters-in-law, Ardis Kuik and Alice Kuik; and many nieces and nephews. He was predeceased by his wife Johanna, daughter Fenny Kuik, son-in-law Bill Gortemaker; grandchildren, Amy Gortemaker and Craig Vanderveen; parents, Jakob and Grietje Kuik; infant sister Margje, infant brother Lambertus, sister Margje Meijer; brothers, Jan, John, and Bert Kuik; and brothers-in-law, Joe Van Dijk, Lefert Meijer, Len Toet, and Sy Raap.
Gerry was born in the Netherlands on September 5, 1924, the fourth of 10 children. After completing school there at the age of 14, he embarked on his printing career through a four-year apprentice program, working while he learned about the different facets of the printing trade. Through this trade he also became involved in the Dutch resistance movement by printing illegal (to the Germans) literature. After the war he worked for another printing company until July 1950 when he with Johanna his wife, whom he married on January 6, 1950, and his parents and siblings immigrated to Canada, settling in the Carman/Homewood area in Manitoba. After initially working on a farm, Gerry again got involved in the printing trade by working for the local Carman newspaper. Shortly after moving his family to Winnipeg in 1958, and with the encouragement and support of his former boss in Carman, he started his own printing business, Premier Printing, as a one-man, one-room shop in Transcona. With the Lord's blessing, Premier Printing moved and expanded several times. In 1995, Gerry retired, turning the leadership of the company over to the next generation.
Gerry also was very active in his faith community, starting as a fieldman in Homewood, assisting many fellow Dutch immigrants to settle in the Carman area. He continued to serve for many years and in various roles in the Reformed church and school communities. Travelling was a large part of his life as well, either personally or through business, and especially after his retirement. He and his wife took many road trips across Canada and the U.S.A., as well as overseas trips to Europe, the Middle East, and the southern continents.
Due to the Covid-19 restrictions, only a private family viewing, funeral service, and interment will be possible, at which only some of the children can be present. Rev. J. Poppe of Redeemer Canadian Reformed Church will officiate at the service which will be held on Friday, January 8, at 2:00 p.m. Those who wish to may follow the service via livestream at https://boxcast.tv/view/gerry-kuik-funeral-service-923911. Interment will be at Green Acres Cemetery.
We express our deep gratitude to the management, staff, and caregivers at Bethania Mennonite Personal Care Home for all the love and care they provided Gerry during the almost four years he lived there, and especially in the last week.
Donations in Gerry's memory may be made to Bethania Mennonite Personal Care Home, 1045 Concordia Ave., Winnipeg, MB R2K 3S7.