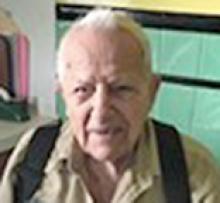 William Kaplan passed away suddenly on Sunday, December 27, 2020 with family by his side.
He was predeceased by his parents, William Sr. and Annie Kaplan; brothers, Stanley and Freddy; sisters, Annette and Lee; his eldest son William Stanley Kaplen (Karen).
He is survived by his dear wife, Alice Kaplan; son Allen Kaplen (Donna); daughter-in-law Karen Kaplen; grandchildren, Andrea, Allen Shawn (Laura), David (Brynn) and Sherilyn Kaplen; plus great-grandchildren, Kody, TJ, Dustin and Brock Johnson, Jessamine Kaplen and numerous nieces and nephews.
William Kaplan Jr. was born in Winnipeg in 1925. He met his future wife, Alice Waters in Flin Flon in 1942 when they were both working in the mines, and they married in 1944. Bill worked for Burns Meats for 25 years, until he and Alice joined their sons, William and Allen in the family business, Ernie's Gun Shop (later known as Ernie's Bait and Tackle Shop). Bill's skills as a gunsmith were legendary. Bill and Alice worked there for 31 years before finally retiring.
When Bill was working for Burns, he also fixed cars in his garage as a hobby. He was an extremely intelligent man. With his grade six education, he could look at a part in a magazine and make it from scratch on his lathe. He could fix almost anything. Sometimes, being quite frugal, he would, like Red Green, use duct tape and string.
In the early 1950s, Bill and Alice built a cabin at Nutimik Lake in the Whiteshell. They cleared the lot by hand and built the cabin themselves, with the help of their friends and neighbours at the lake, Eddie and Mary Klyne. They spent many happy summers at the cabin as their two boys grew up and in their retirement years. They enjoyed boating and fishing, and in his younger days, Bill enjoyed waterskiing. In retirement, Bill developed a passion for looking for treasures in refuse dumps, finding items that other people no longer saw as useful, fixing them up to resell, or selling the scrap metal. He was always making something on his work bench downstairs. He instilled in his family the importance of saving for a rainy day.
In later years, he enjoyed the times when family members visited him in his home. Bill and Alice Kaplan celebrated both their 96th birthdays and 76th wedding anniversary this year. If you knew Bill, he would want you to have a toast with a shot of cactus juice in his honour.

Safe journey "Tech." We will miss you.
Love, your family.

A Celebration of Life will be held at a later date.