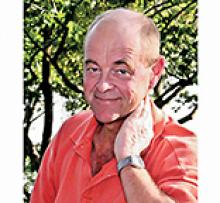 It is with profound sadness that we report the death of Denis Hosking, who passed away as a result of myeloma at the age of 71.
He leaves behind to mourn him, Dee, his loving wife of 46 years; children, Nolan and Michelle (Paul Van Caeseele); and grandsons, Luke, Mark and Eric.
Denis was born in Dundee, South Africa and completed his medical degree at the University of Cape Town in 1972. While at medical school he met Dianne (Dee) and they married four years later in August, 1974. After working in hospitals in South Africa for three years, he and Dee moved to the U.K. where he underwent further training in surgery, successfully passing the final examination of the Royal College of Surgeons of Edinburgh. They then moved to Winnipeg to accept a position as a general surgery resident at the University of Manitoba. Denis later changed from general surgery to urology, and completed his urology training in 1982. After a further year of study at the Mayo Clinic in Minnesota, he returned to Winnipeg to accept a position as an Assistant Professor of surgery in the section of urology, based at the Health Sciences Centre. He remained a urologist at Health Sciences Centre for the rest of his career. In 1990, he was appointed Head of the Section of Urology for the Health Sciences Centre and the University of Manitoba, positions he held for 20 years until 2010. Denis especially valued the support he received from the operating room staff, the nurses in the urology clinic and treatment areas, the radiology technicians and the office staff. He considered every member of the urology team essential in providing the best possible patient care.
Denis was very active outside his clinical practice. In 1994 he was appointed Chief Examiner in Urology for the Royal College of Surgeons of Canada for a three year term. In 1998 he was promoted to Full Professor of Surgery in the Section of Urology. In 2000 he was elected President of the Canadian Urological Association, and in 2008 he was awarded the Canadian Urological Association Lifetime Achievement Award for lifetime contributions to Canadian Urology.
He enjoyed most sporting activities. Apart from the usual team sports played at school, he enjoyed tennis, squash and developed a lifelong love of golf while still a schoolboy. He and Dee were members of Pine Ridge Golf Club for over 16 years and really enjoyed playing with other golfing couples as often as possible. Denis also loved their golf holidays down at Hilton Head Island.
Among his other interests, he enjoyed motorcycling and white-water kayaking. He twice completed the gruelling 120 kilometer Dusi Canoe Marathon from Pietermaritzburg to Durban, South Africa. Outside of sports, he had great interest in photography, Photoshop, and duplicate bridge.
Those who knew him well will remember him as a healthy, vibrant individual with an aura of mischief and a wicked sense of humour. His classmates will remember The Cheerleader - a true leader of cheer. Colleagues respected him as a gifted teacher, an outstanding leader, and a very thoughtful clinician. Most of all, he was a person of substance and integrity.
The family would like to extend their sincere gratitude to Drs. Van Ameyde, Rimmer, Johnson, Ahmed, Muirhead and Lipschitz for their care and support for Denis during his 11 years of living with myeloma. A special thanks to Ken Van Ameyde for his consistent support, availability and concern throughout Denis' illness.
If anyone wishes to make a donation in Denis's memory, please donate to either CancerCare Manitoba Foundation or the Humane Society.
Cremation has taken place. At his request, no service will be held. Make a donation to