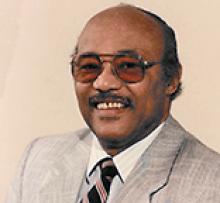 Born in Princes Town, Trinidad, Charles Conyette was educated in England. He obtained an engineering degree from Brighton Technical College and a post-graduate degree in public health from Imperial College.
After completing his studies, he returned to his homeland of Trinidad. There, he achieved the highest engineering position in the Public Service of Trinidad. As head of a United Nations team of experts, he was posted to Tobago to repair the ravages of Hurricane Flora. And for several years, Charles worked as Chief Technical Officer in Trinidad and Tobago.
In 1972, he relocated to Canada and obtained a double master's degree in Urban and Regional Planning and Transportation Planning at Queen's University in Kingston, Ontario. After completing his studies, Charles accepted a position with Northern Affairs in Thompson, Manitoba as Director of Engineering. This involved working with community chiefs and band councils in northern communities to ensure efficient delivery of services.
From 1990 to 2001, Charles lent his expertise as Special Projects Engineer for the Department of Conservation where he assessed proposals for water supply systems and facilities to treat wastewater.
Charles was actively involved in the Caribbean community and served on several cultural boards and committees, including a term as President of the Caribbean Canadian Association of Winnipeg.
His work found him returning to several Caribbean countries with a Canadian International Development Agency initiative to improve and transfer management skills to the Eastern Caribbean. He also delivered several training programs to senior management with the Government of Trinidad and Tobago.
As an author of several influential published works, Charles delivered key presentations to a wide range of audiences, including the Canadian Geotechnical Society.
Charles peacefully passed away at the Seven Oaks Hospital in Winnipeg, Manitoba. He will be deeply missed by his wife Ann, his four children, Paul (Audrey), Michael, Giselle (Desire), and Jacqueline (Brent), along with numerous relatives and friends.