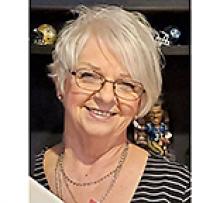 Surrounded by family, Penny, aged 74, started a new journey where many loved ones were waiting to embrace her gentle spirit.
Already missing her is her son Jarrett and daughter of choice Tammy; grandsons, Jackson, Grayson and Jamason; siblings, Jeff (Lynn) Kendel, Kevin (Angie) Kendel, Leanne (Rick) Slobodian, Lorrie (Peter) Rogalka; brother-in-law Don (Olga) Onyschuk and many nieces, nephews, cousins and life-long friends. The family would like to thank Paul Minsky for being such a special friend and companion. Thank-you for loving and treating Mom so special. She loved you.
Penny was predeceased by her husband Len (2016); mother Verna (2012) and father Howard (1999).
Penny was born and raised in MacNutt, Saskatchewan on February 19, 1946. She was the oldest of five. She loved annual visits to her hometown. The family moved to Winnipeg in 1954, starting in Kirkfield Park, then Windsor Park, and finally in 1960 to Dunrobin Avenue in East Kildonan. Penny left school after grade 11 to work at Crown Zellerbach as a secretary. She met Len in 1964 and married in 1966. Penny worked at Newman McLean until the birth of her only child Jarrett in 1971. Penny resumed working in 1974 at Gordon Hotels as an executive assistant for 33 years. After retirement, Penny's time was spent with family and friends. Penny's greatest love was her grandsons, nieces and nephews. She helped her brother Jeff, serving tables at his restaurant (Kendel's) and Saturday family breakfasts was something she looked forward to. She was asked on her first date by Paul while cashing him out. That led to two years of something really special. Penny was an active member at Grace Lutheran Church. Thank you to pastor Bruce Gelhorn, Dr. Speziali and especially nurse Lisa at CancerCare.
Penny had a huge heart and made sure everyone stayed connected. She will be missed beyond words, always celebrated and never forgotten.
In Penny's memory, please consider giving a blood/platelet donation in her name. A memorial will take place at a later date for family and close friends.