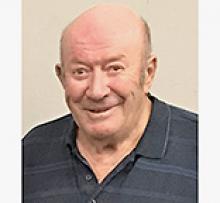 It is with heavy hearts, we announce that Ralph passed peacefully at Stonewall Hospital with family by his side.
He will be lovingly remembered by his wife of 65 years, Eileen (nee Eskilson); daughter Sharon (Sandy); sons: Doug (Karen), Rod (Shelley), Murray (Christine); grandchildren: Alana, Kristyn (Nathan), Lindsey, Karley (Jack), Breanne, Reid (Kayla), Melissa (Dillan), Ashley (Brent), Andrew (Kirsten); great-grandchildren: Brexley, Margot, Riot and Max. He is survived by sister Eileen Wonnick and brother Merv Campbell; brother-in-law Allan (Sophie) Eskilson; sister-in-law Irene Javor; and many nieces and nephews.
He was predeceased by brother-in-law Leonard Eskilson, sister-in-law Lyle Campbell and brother-in-law Gordon Wonnick.
Raised on the family farm east of Teulon, he attended Stacpoole school but quit after Grade eight to farm at home when his dad bought him a tractor. Ralph and Eileen were married on October 1, 1955 and moved to their farm in 1963. They retired to Teulon in 2015. In the early days, he worked in Winnipeg as a meat cutter and then became a certified welder. Even though busy on the farm, Ralph still found time to serve for many years as a Councillor and Reeve for the R.M. of Rockwood. Being the proficient welder he was, many a night was spent thinking about the next creation - we would tease Dad about what he had been "working on" last night. A farmer at heart, he still loved going for a drive to check the crops.
Time was made every summer for the family to get away for a weekend of fishing. Later this love of fishing evolved into camping trips to Hecla and fishing off the dock. Campsite neighbours were often gifted with one of his original "fire poker" tools or given a box of dry wood when struggling to get a fire going. The Campbell Fishing Weekend on Father's Day was a highlight of his summer. Being a family man, he truly enjoyed when everyone was together and considered it the greatest gift of all.
Cremation has taken place and a private interment will be held at a later date.
If friends so desire, donations may be made in Ralph's memory to Parkinson Canada in Manitoba, 7-414 Westmount Drive, Winnipeg, MB R2J 1P2.
The family extends a heartfelt thank you to Dr. K. Graham and the staff of the Stonewall Hospital for being so caring and compassionate.

Gods garden must be beautiful,
He always takes the best
He knew you were suffering,
He knew you were in pain
He knew that you would never
get well on Earth again
He put his arms around you and
lifted you to rest.