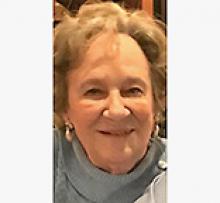 It is with great sadness that we mourn the passing of Gail Gilbert on December 31, 2020 at St. Boniface Hospital.
Gail will be lovingly remembered and is survived by her husband of 59 years, Bob; children: David; Susan (James) their daughters, Megan, Jennifer and Lauren; Grant (Pauline) their children, Melissa, Tiffany and Carson. She is also survived by her sister Carol; sisters-in-law, Shirley Anne and Donnie; cousins, nieces and nephews. Gail was predeceased by her parents, Ewart and Margaret Horwood.
Gail was born in 1939 in Winnipeg, Manitoba and spent her early years on Dominion Street in the West end, then moved to Lyon Street in Fort Garry in 1950. Finishing high school at United College, Gail achieved a teacher's degree and began her teaching career. Bob and Gail married in 1961 and Gail continued to teach until the birth of their first child. Gail's main focus was raising her children, while supporting Bob's growing business.
Family was everything to Gail. She found happiness in family gatherings, with organized lists for all occasions prepared well in advance. There were great summers spent at West Hawk Lake with gatherings of friends, aunts, uncles and cousins from Winnipeg, Ontario and Michigan. Gail also loved the numerous family trips spent together. Some of Bob and Gail's most treasured memories are from the trips they shared attending conventions and vacations to many warm destinations.
We love you and will miss you but rest assured, the Horwood tradition of turnip, popovers and gravy that you instilled, will live on.
The family would like to thank the staff on the fifth floor of the I.H. Asper Institute for the outstanding care and compassion that Gail received.
A Celebration of Life will be held at a later date.