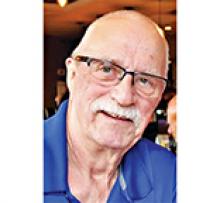 On January 1, 2021, Bill aged 72 years passed away.
He is survived by his wife June of 52 years, son Steve (Lisa), four grandchildren; Mikyaela, Joshua, Xavier, Scott and son-in-law Blair. He leaves two great-grandchildren; Kayson and Zaleah and extended family.
Born in Winnipeg, he eventually joined the Navy and upon returning from a Far East cruise, he met June and they were married on November 23, 1968.
Bill was employed at Headingley Gaol, then at Stony Mountain Penitentiary where he gained many friends and colleagues. Once retired he decided to go to Red River
Community College and learn how to become a long haul trucker.
Bill and June moved to Matlock, MB approximately 30 years ago and he joined the Matlock Fire Department as a volunteer fire fighter and taught classes in CPR and First Aid.
Bill was the local handyman and tended to many friends yards, cutting their grass. He would do whatever he could for friends and neighbours, when called upon.
Bill loved sports. He umpired fastball and slopitch games, refereed hockey, enjoyed target shooting and you could find him with the Chippawa Curling Club, encouraging one and all with the finer techniques of the game.
Bill loved playing the guitar with the Jammers in Gimli and Otter's Craft in the Village of Dunnottar.
Bill and June were able to spend may winters in Texas with their cherished friends.
Our family is truly grateful to the Home Care teams who assisted in allowing Bill to spend his last days at home.
Much gratitude and thanks to Brian, "his adopted brother"

I LOVE YOU, MY CANDYMAN!

Words of condolences may be left on Bill's memorial page at www.interlakecremation.ca