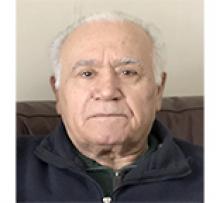 On Tuesday, January 5, 2021, our loving husband, father and grandfather, Leo Anastasiadis, passed away peacefully in his home at the age of 82.
Born in Agrosikia Pellas, Greece to a large family, Leo learned the importance of hard work. As a young man in Greece, he met his wife Sophia and eventually embarked to Canada in 1966 to seek new opportunities. He eventually brought Sophia to join him in 1969, where they settled in Winnipeg and married. He trained to be a welder and continued this work for 35 years. He was a member of the Plumber and Pipefitters Local Union 254, where he was honoured with longstanding service as a retired member. Once he retired, he was able to do what he loved most, which was being a family man with Sophia, enjoying numerous visits from his children and two grandchildren. Leo was an active member of the Greek Community and had many friends that he enjoyed spending time with, going on hunting trips and having coffee at the mall. He was a thoughtful man, and was considered reliable to all who knew him. He was quick to lend a hand to family, neighbours and friends and did so with kindness and humility. Ultimately, it was his firm faith in God and family that we will remember him for. We will miss his presence, but are comforted in the fact that his spirit will always be with us.
Leo is survived and remembered by his wife Sophia; children, son Jim; daughter Vycki (Adam); granddaughter Nadia; grandson Kevin; sister-in-law Sophia; in-law Lamia; his nieces, nephews along with numerous family members and friends both in Winnipeg and Greece.
Due to current restrictions, a private family funeral service was held on Friday, January 8, 2020 at St. Demetrios Greek Orthodox Church. Interment was followed at Brookside Cemetery.