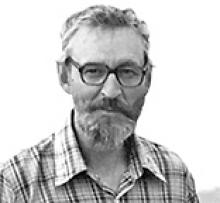 Arthur Dale Walter shuffled off this mortal coil on Friday, January 1, 2021 at Lions Personal Care Centre in Winnipeg, Manitoba.
Born July 26, 1932, in Wilkie, SK, to Gwyneth and Harvey Walter, he met Joan Nissen while studying at the Provincial Institute of Technology and Art. They left school early, and were married in 1958. Art began his career in museum exhibit design at the Museum of Natural History in Regina, and then the Provincial Museum of Alberta in Edmonton. He was hired as the senior designer for the Manitoba Museum of Man and Nature in 1968, where his prominent work included the Nonsuch Gallery. In 1974, Art accepted the position of Head of Interpretive Design at Parks Canada for the Prairie and Northern Regions, where he supervised exhibitions for historic sites at Lower Fort Garry, Batoche, and Dawson City, among many others.
After 1991, he continued his career as part of Nighthawk Interpretive Design and as an independent contractor, retiring in 2005. Art worked gave countless hours to the Royal Aviation Museum of Western Canada and made many fine paintings of vintage cars and airplanes.
A remarkable man in so many ways, Art could fix anything mechanical, draw cars and airplanes better than you can, and crack bad jokes effortlessly while doing so. He loved anything steam-powered and disliked vegetables, cats, and hippies. Art is survived by his wife, Joan, and his brother, Lyle; by children, Chris, Jim, and Lisa; and by assorted grandchildren and even a great-grandson. He was predeceased by his son, John.
In these coronavirus days, the family will host an online wake.
Rather than flowers or gifts, Art's family encourages donations to Lions Housing Centres or a local music organization of your choice.