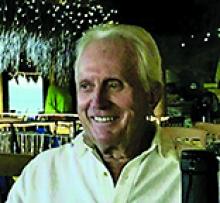 On January 5, 2021, with Liz and his sons by his side, Ed passed away in Puerto Vallarta, Mexico, a place he loved.
Ed was born in 1932 in Winnipeg, spending his youth in the city's North and West ends. He graduated from Daniel McIntyre High School where many lifelong friendships were made. After exploring a series of opportunities Ed took a position at Stovel Advocate, which began his long and successful career in the printing industry. While Ed's career began to advance, he attended the University of Manitoba obtaining his Management Certificate. Rising through the industry, his career eventually took him and his family to Calgary. Seeing an opportunity for further challenge and success, Ed and a longtime colleague purchased Systems Business Forms and grew it into an international consideration. The sale of the company some years later signaled Ed's retirement from the printing industry, although Ed remained an active member of the business community for years to follow.
Liz and Ed married in 1958. Their family began with the arrival of Ward, followed by Craig and then Dean. His grandchildren and now great-grandchildren brought him even greater joy. Ed was an avid curler, golfer, voracious reader and passionate debater. Most of all Ed and Liz loved travelling and seeing the world together. He was happiest spending time with Liz and his family and friends. Ed and Liz spent the past 15 years dividing their time between Priddis, AB and Puerto Vallarta, MX.
The foundation of our family, Ed was an incredibly passionate and loving husband, father and grandfather who touched many lives and was respected by all.
Did we mention curling?!
Always loved and forever missed by his wife Liz; sons, Ward, Craig (Catherine) and Dean (Karen); sisters, Ruth Snyder and Elsie Unger; grandchildren, Ryan (Nell), Tyler (Annika), Nathan (Michelle), Sara, Erin and Holly; great-grandchildren, Edward Elvis and Charlie; and his nieces and nephews.

In lieu of flowers, donations may be made to The Salvation Army.