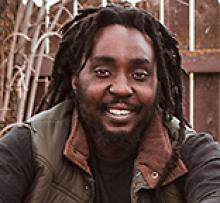 It is with great sadness we announce the tragic passing of our loving husband, father, son, brother, uncle, great uncle and friend.
He has left behind his loving wife Jenn and his two beautiful daughters, Londyn and Irelyn. He is survived by his father Victor Gill (Doreen), mother Sonia Beckles; sisters, Alicia, Tola, Janelle; and brother Todd. He will also be greatly missed by his father-in-law Merv Lenz (Esther), mother-in-law Janet McLeod (Paul); sisters-in-law, Amanda (Kevin), Heidi (Logan); and many nieces, nephews, great-nephew, cousins and friends. He was predeceased by his paternal and maternal grandparents, as well as his sister Katrina.
Victor was born on March 18, 1981 in Bridgetown, St. Michael, Barbados. He completed his primary and secondary education before starting his position with the Government of Barbados for the next 14 years.
On a trip to Manitoba, Canada in 2011 he met Jenn whom he immediately fell in love with. After a few years of long distance, welcoming their first daughter in 2013, becoming husband and wife in 2014, he made the final flight to Canada in 2015. Victor became a proud Permanent Resident of Canada in 2016 and started his career with Brett Young Seeds in 2017 just before welcoming their second daughter.
Victor was a proud family man and the love he had for his wife and daughters never went unnoticed. He was always up for a new adventure where he learned to ice skate, snowmobile, toboggan, curl and play slow pitch. He had a passion for football "soccer" which he has passed on to his daughters.
He will be greatly missed by all who knew him.
A private family service will be held at a later date.
In lieu of flowers, donations may be made to a beneficiary account at Access Credit Union - Sanford branch. Cheques are to be made payable to The Beckles Family Support Fund. Cheques may be dropped off in person at the credit union or be mailed to: Access Credit Union, Box 147, Sanford, MB R0G 2J0.