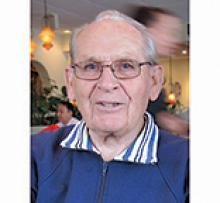 Our Dad, Henry Cornelius Kehler, died on December 19, 2020, at about 5:35 p.m. at Menno Hospital in Abbotsford, BC.
Henry was born on March 5, 1930 in a village near Kryvoy Rog, Ukraine. Henry was the sixth of the eight children born to Kornelius and Helena Kehler. During the Second World War , Henry migrated through western Europe and arrived in Canada in 1948. After several years of working on a farm at Watrous, Saskatchewan, Henry met Tina (Katharina Nickel) and moved to Winnipeg. They married on August 24, 1957 and had three children, Ruth, Rudy and Ron.
Henry spent most of his working life as a bus driver for Winnipeg Transit. After retiring from driving bus he built a few houses in the North Kildonan.
Henry was very committed to the work of serving God by contributing time and energy to Sargent Avenue Mennonite Church where he was Sunday School teacher, Vorsänger, Bible Study leader, Deacon and a champion for German language services.
Shortly after Henry and Tina's 60th anniversary in 2017, Henry fell and broke his leg prompting a new level of care for both Henry and Tina. They moved to Abbotsford, BC to be closer to Ruth and Rudy's families.
Henry was predeceased by his siblings, and is survived by his wife Tina; children, Ruth and Dave Plenert, Rudy and Maureen Kehler, Ron and Frieda Kehler, 10 grandchildren and 12 great-grandchildren.
Our thanks for the exceptional care provided to Henry and Tina at Menno Hospital, Abbotsford, BC.