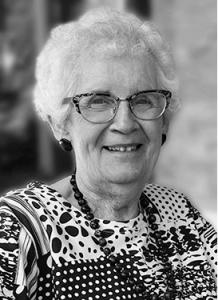 SLIMMON: Ina Grace (nee Smith) passed away peacefully at Assiniboine Centre, Brandon, Manitoba January 12, 2021 with her daughter at her bedside. Ina was born August 10, 1923 in the Ryerson district north of Oak Lake. Early life was filled with horse riding, studies at the nearby one room schoolhouse and the warmth of family – aunts, uncles and cousins living throughout the Harvey and Ryerson districts and the Sandhurst district south of Oak Lake. The experience of a large, extended family within the close knit farming communities through the difficult years of the Depression would shape Ina's enduring qualities of compassion, sharing and hospitality; her love of life and her devotion to family and community. Following studies at Oakwood High School, Ina completed her teaching degree at Brandon Normal School. Her teaching career took her to one room schools near Brandon, Virden and Rapid City, boarding with local families as was the custom for young teachers in rural communities. In 1948, she married Charlie Slimmon, the handsome soldier returning from WWII service in Holland. Their life together operating a mixed farm on 20-10-23 included living in the large Eatons mail order catalogue farmhouse built by Charlie's parents, the lumber for which had arrived from the coast in the early 20's via box car (some assembly required!). In short order a family of six children arrived over the period 1950 to 1960 and life got serious. The 1950's were challenging times and days were full of work and toil – dairy equipment to clean daily, a large garden to work, preserves to make, clothes to sew for the children, meals to prepare, laundry and, of course, constant trips for each child's activities – piano lessons, band practice, 4-H and hockey games. On baking days, the house was filled with the aroma of fresh-baked bread, cinnamon buns, cakes, cookies and butter tarts. On many occasions Ina's baking skills were rewarded with red ribbons at Oak Lake Fair. Ina was a master at multi-tasking but of course back then every farm woman participating in the operation of a farm and raising a large family had to be. She was eternally optimistic and persevering and, despite long days of toil, always displayed her compassion, finding the time to visit a sick neighbour or an elderly aunt or uncle, bearing a gift of baking or flowers from her garden, and usually with one or more of her kids in tow. From its 2006 founding, Ina was a supporter of the Steven Lewis Foundation's 'Grandmothers to Grandmothers Campaign' which provided support for life-enhancing programs in African communities. Ina's faith was an integral part of her life and she played an important role in the community's United Church, leading the children's choir, playing piano and organ for weekly church services, participating in the United Church Women's group and representing the community's church at the Canadian annual conference on occasion. She enjoyed writing and was a co-editor of the Oak Lake Town and Country News as well as the 'North Country' reporter. Empty nesters by the late '70's, Ina and Charlie could let up on the gas a little. While still operating a grain and dairy farm they took more time to enjoy curling, square dancing and old time dancing, establishing friendships that would last a lifetime. They operated a bed and breakfast and Ina sang with the Kentones barbershop group. She took up knitting and, along with other women in the community, organized a quilt-making enterprise that crafted dozens of beautiful quilts. For decades the couple maintained a bluebird line through the countryside west of their farm, constructing and maintaining birdhouses along fence lines and recording data for Brandon University's bird nesting research program. By the end of the 1990's it was time to downsize and the couple moved to Oak Lake where they continued to enjoy travel, card games, gardening and friends. Always keen to explore new things and to follow and support her children's and grandchildren's achievements, she acquired new computer skills and used her email account well into her 90's while still corresponding regularly by letter with friends across Canada. Following Charlie's death in 2005, Ina moved to Lions Manor in Brandon where she enjoyed participating in the facility's social groups and became an intense fan of curling. In 2012, she travelled coast to coast visiting family and friends while in 2013 she hosted family for her 90th birthday celebrations. In her later years, her joy each week was receiving news and images of great-grandchildren as well as conversations and visits with children, grandchildren and friends. Ina was predeceased by husband Charlie, brother Lyman and son Craig. She is lovingly remembered by her children Dianne (John), Wendy (Peter), Trevor (Alan), Tannis (Lewis), and Mike (Lisa); daughter-in-law Caroline; grandchildren Jeremy, Megan, Jessica, Katy, Patrick, Melissa, Nickila and Riley; five great-grandchildren; brother Keith (Joy); and many nieces and nephews. A memorial service will be held at a later date when we can safely gather. Donations in memory of Ina may be made to: Oak Lake Community Foundation P.O. Box 133, Oak Lake, Manitoba, R0M 1P0 or Stephen Lewis Foundation 260 Spadina Ave., Suite 100, Toronto, Ontario, M5T 2E4 (Stephenlewisfoundation.org)

Messages of condolence
may be left at carscaddenfuneralchapel.com
Carscadden Funeral Chapel, Virden, in care of arrangements.