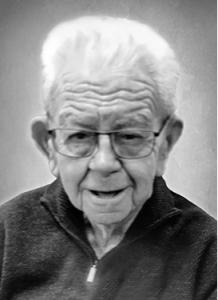 SPEERS: David J. Speers, 18 June 18, 1930-Jan. 13, 2021. David passed away peacefully at the Assiniboine Centre in his 91st year. He is lovingly remembered by his son Gerald (Glenda), grandsons Garrett, Geoffrey (Meghan) and great-grandchildren Logan, Gage and Kenna. David was the youngest son of James and Lizzy Speers of the Alexander district. He was raised and farmed in this area all his life. David married E. Olive Dunn in 1953 and they shared 67 wonderful years together, prior to her passing in August of 2020. They kept very busy with a mixed farm operation and raising their son. Camping at Oak Lake was often enjoyed and he was an avid curler. They also enjoyed socializing with a close knit group of friends, playing cards and travelling around for fall suppers. Together they enjoyed trips to Alaska, the Maritimes, Florida, Arizona, Victoria and several Briers. Twice they accompanied family to Mexico for their grandsons "in the Sun" weddings. David told us that as a child he contracted polio and the farm was placed into quarantine for many months with only groceries being dropped off at the end of the lane on a weekly basis. His mother told him that when he was born the doctor announced that he appeared sickly and wouldn't live a year. He beat the odds and lived a good life into his 91st year. He often expressed amazement that he continued to tick along in life when many Speers' relatives were not so lucky. Upon retirement they moved to Brandon and enjoyed making many new friendships. David was predeceased by his wife Olive, brother Tommy, sister-in-law Leila and many other in-laws. Interment will be held at the Alexander cemetery at a later date. Many thanks to the staff of A3 waiting placement and palliative care for their compassion and wonderful care provided to David and our family. Donations in his memory may be made to Brandon Regional Health Centre Foundation "A3", 150 McTavish Avenue East, Brandon, MB, R7A 2B3.