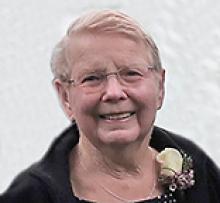 With sadness we announce the death of Isabell Tjaden on January 7, 2021, at Carman Memorial Hospital.
Isabell was born Margaret Isabell Robertson, in Whitewood, SK on March 6, 1934, the only child of Cassie Isaacs and Allan Robertson. Her mother died within several days of her birth. Isabell was raised with several families, including her grandparents and an aunt and uncle at Whitewood and her Aunt Iris (Walter) Miller and their children, Louise (Vern Axten) and Gayle (Carole Miller) at Minton, SK. Later she went to Alexander, MB to live with her father and Vera Butterfield and family (Jim, Fern, June, Mazie, Dale, Doug, Frank, Marlene). Her strong resilient spirit was forged in these early experiences, helping to make her the kind, compassionate, gentle person we were blessed to know and love.
She completed secondary school at Alexander and moved to Brandon where she attended teacher's college. She taught in Flin Flon and Elphinstone before moving to Sperling to teach in 1957. She married Bill Tjaden in 1962 and joined the Tjaden family (Anna and John Tjaden: Helen (Gordon Stewart), Mona (Randy Bilton), Bob (Marguerite DeMason), Jim (Dorothy Hodgson), and Ken (Marlene Duvenaud). Bill and Isabell made their home on the Tjaden family farm where they continued to live for the rest of her life. Her nieces and nephews (Tjadens, Axtens, Millers, and Butterfields) share fond memories of time spent at the farm.
Bill and Isabell had three children: Karen; an infant son who died at birth in 1964; and Susan. Karen and Sue grew up surrounded by love, learning valuable life lessons every day as Isabell and Bill shared the work of farming and raising a family while contributing to the Sperling community. We are so thankful for Isabell's dedication to her family and her steadfast example of generous service, compassion for others and commitment to justice and fairness for all. We know we were very privileged to grow up in a loving stable home, with lots of love, plenty of healthy food, time to play outside, high expectations and a strong sense of our own purpose and place in the world.
Bill and Isabell's family grew with the marriage of Karen to Rob McClement (1989) and Sue to Scott Day (1992) and four grandchildren: Anna Tjaden-McClement (Ryan Koltalo), Alex Day (Ben Jones), Paul Tjaden-McClement (Erika Rempel) and Katie Tjaden-McClement. The McClement and Day families welcomed Isabell and Bill wholeheartedly into their families, creating many more strong connections and shared memories. We needed all of this support when Sue was diagnosed with brain cancer in 1995, and following Sue's death on December 21, 1999. Sue lived by the motto Carpe diem and together we learned to make the most of every day as we accompanied Sue, Scott and Alex through those years that were jam-packed with laughter, tears and so much love!
Isabell and Bill were very active in the lives of all four of their grandchildren, and they were especially involved in caring for Alex at Sperling and Deloraine. Anna, Alex, Paul and Katie feel so fortunate to have grown up guided by Isabell's love and example and they will remember her as a gentle, kind, honest, generous, intelligent, quick-witted, hard working, progressive, grounded person and overall a shining example of how to be in this world.
Isabell was a faithful member of Sperling and Carman United Churches and Sperling UCW. Isabell quietly and competently contributed to the life and well being of the Sperling community and the wider world. Although she lived with heart disease for a number of years, she always had a good heart.
Thank you to all the young hockey and baseball players, coaches, parents, volunteers and staff at arenas and ball parks all over Manitoba (and beyond) who provided countless hours of fun and enjoyment. As an avid spectator of amateur sport and an active participant in life, Isabell taught us by example that while it is fun to watch the score board, the most important thing will always be how you play the game.
We invite you to join us in remembering Isabell's life in a particular way on her birthday March 6 - read a book, work on a crossword puzzle, enjoy a hockey game, phone someone or write a letter, enjoy a winter walk, play a game with someone you love, or anything else that reminds you of the importance of enjoying each day as a gift and being the best ordinary person you can be!
We look forward to a service and gathering in person when it is safe to do so. In the meantime, may our Celebration of Life be ongoing as we give thanks for each day. Remember her well in thought, word and deed.
Thank you to all the staff of Carman Community Health Centre and Carman Memorial Hospital, and Dr. Andrew Morris for the excellent medical care and your kindness over the years.
Memorial donations may be made to a charity of one's choice.