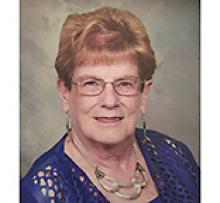 It is with sadness that the family announces the passing of Julia Clara Beaudin on January 9, 2021 at the Grace Hospital.
She was predeceased by her parents, Meinrad and Clara Charriere; sisters and brothers-in-law, Florence - John Bourlet, Mireille - Francois Bourrier, Joseph Chwartacki, Elmer Thompson; and her brother Lucien Charriere. Also predeceasing her were her sister-in-law Germaine (Louis) Beaudin; and brother-in-law Guy (Gilberte) Guilleminot.
She will be lovingly remembered by her husband Robert (Bob) Beaudin; and their two daughters: Rachelle (Jim) and Monique (Mike) Heise. She is also survived by her grandchildren: Brady, Kesslyn, and Rylan Lagasse, Isabella and Rhea Heise; as well as by her siblings, Adele Chwartacki and Ursule Thompson; and her late brother's wife, Bertha Charriere. Also surviving her are her in-laws, Yves E. Beaudin and Judith Simard, Louis Beaudin, Alfred Beaudin and Alana Hancock, and Gilberte Guilleminot.
She was born in Winnipeg, Manitoba. She was a devoted, committed and loyal daughter, sister, wife, mother, mémère, friend and co-worker. She was always proud of her children and grandchildren, and she enjoyed living her life to the fullest. In the last few years of her life, Julie's health challenged her independence, which she was always able to overcome. Julie attended school at the St. Joseph Academy where she graduated as an accomplished secretary, able to work in both official languages. Her first job was working for a legal firm as a legal secretary, which she left some 10 years later to have her two children over a span of six years. Once the girls were in school, she went back to the commercial world, working for an insurance agency. While waiting for the stork to finally land at their home, Julie and Bob enjoyed travelling and saw most of Canada and the United States. They also travelled to Europe a few times, where they visited some 10 countries including Switzerland, where they visited with Julie's family. They also waved to the Pope in St. Peter's Square.
The family wishes to acknowledge the kindness and compassionate care that Julie received from her family physician, Dr. Christopher Fotti, from the doctors, nurses and support staffs at St. Boniface Hospital (4 ECU), at Deer Lodge Centre (Lodge 4 West), and at Grace Hospital (Covid 5 South and Medicine 3 South) as she fought to recover from a stroke, a broken pelvis resulting from a fall, and finally Covid-19 with accompanying pneumonia. A special thank you is also extended to Father Gerry Sembrano, who participated in virtually giving Julie the Sacrament of the Sick and Absolution. Julie, Mom and Mémère you will be missed and will remain in our hearts forever.
In lieu of flowers, donations may be made, in Julie's name, to the Foundation of either of the three hospitals mentioned above. A memorial mass at St. Emile Parish Church and a private family interment at Fort Garry Roman Catholic Cemetery will be held at a later date.

The Coutu Family in care of arrangements:
ejcoutu.ca