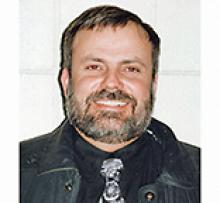 It is with heavy hearts that the family of John Wallace announces his passing on January 8, 2021, of cardiac arrest in Vernon Jubilee Hospital in BC.
He will be lovingly remembered by his family and many friends. Left to mourn John's passing are his mother Doreen, sister Lori (Ed Boldt), sons MacGyver and Christopher, daughter Carrie Baldwin (Jordon), and grandchildren, Paige Wallace (Anthany Ngo), Cameron Clapham, Devon Clapham, Livia Wallace and Jackson Baldwin. John was predeceased by his father, Gerald Wallace, in 2007.
John will also be remembered with love by his aunt Rosemary Wallace and cousins, Bill (Cathy Veerkamp), Patricia (Myles Blank), and Alex, and by our close family in Saskatchewan, Joan Adrian and Ron Shorvoyce and Brian, Brad, and Brent Endicott and their families, as well as by Evelyn Smith and family in Alberta.
Born and raised in Winnipeg, John graduated from Red River College and the University of Manitoba, and enjoyed teaching high school at Sisler and in Oakbank. He was mad about cars all his life, and in the 1980s decided to leave teaching to build a busy auto repair and body shop in Stonewall, MB. He was a talented auto mechanic, and took much pleasure in teaching others his skills. In 2016, he retired and moved to Vernon with his younger son, MacGyver.
John inherited his father's genius to build or fix anything, especially electronic or mechanical. His first "real" job was at age 16 at Coughlan Ltd., but long before that he had sewn up the neighbourhood business in grass-cutting, snow clearing and paper routes. John owned a car long before he could legally drive it, and puttered on it in the backyard with his dad.
John was a kind-hearted, generous, and hard-working man. He helped anyone he could, whether it was building garages, towing vehicles out of snowbanks or fixing anything broken. He would agree that he was not a perfect man, who could be stubborn as a first-class mule. However, he lived life simply and on his own terms.
Beyond his family, John will be missed and affectionately remembered by many friends, the closest of whom include Mark Ireland, Harry Stephan, and recently, Shane Webster in Vernon, as well as his former spouses, Wendy Bowman and Donna Salkeld.
Our family wishes to extend our sincere gratitude and appreciation to Donna Young, Aurlie Young-Gagnon and Paul Gagnon in Vernon for their love and care for John and MacGyver.
Cremation has taken place, and a service will be held at a later date when Covid-19 restrictions no longer apply, and family and friends can gather to honour John and celebrate his life.

Let's keep his laughter in our ears,
and his love in our hearts.