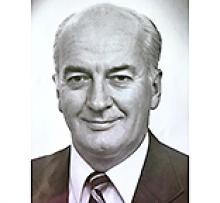 With love and sadness, we announce the passing of Douglas (Doug), predeceased by his "first mate" of 63 years, Patricia Wheeler.
Doug leaves to mourn his four children: Wendy Eakins (Andrew) of Calgary and grandchildren, Kyle, Alexandra and Grace; Ross Wheeler (Beth) of Winnipeg; Glen Wheeler of Victoria; and Linda Baylis (Greg) of Winnipeg and grandchildren, Kevin and Jeffrey.
Dad graduated from the University of Manitoba in 1951 with a Chartered Accountant degree and was awarded a "Fellow" in 1971. After 25 years of service, in 1985 he retired from W. G. McMahon Ltd. as Executive Vice President.
Dad was a card-carrying member of MENSA. Solving a crossword, a riddle, or any kind of puzzle was so much a part of his daily routine. He had many community interests. He was the past president of the (downtown) Rotary Club of Winnipeg, the Financial Executives Institute, Junior Achievement of Manitoba, the Winnipeg Badminton Club, and the Probus Club of Winnipeg. He was the Canadian Director of Toastmasters International, a C.A.S.E. councillor for the Business Development Bank of Canada and was a past director of Manitoba Marketing Network. Due to his love for boating, he was a past Commodore of the Redboine Boating Club and the Winnipeg Canoe Club.
Growing up in the Wheeler family, on the Red River, meant you were a part of the power boating world. Our dad built boats, piloted boats and for much of our parents' lives, they lived on a boat (Gimli). A worthy childhood memory is all six of us cruising to Victoria Beach by boat - to live onboard for a summer family vacation. For many years, Mom, Dad and other like-minded friends enjoyed winter boating excursions to the Bahamas and the British Virgin Islands. Doug, the captain, easily seen under the bimini, rum and diet Pepsi in hand, ice having been nicely "cascaded" and Jimmy B. playing softly in the background.

THAT, was our Dad!


Our parents enjoyed many snowbird years, first in Florida and then in Texas.
Dad's personality "filled a room", just being dad, or as his "side-gig", a stand-up comedian with "international" experience!

A "Celebration of Life" gathering will be held when Manitoba Public Health allows such events.
In lieu of flowers, donations may be made to the Rotary Club of Winnipeg, Permanent Endowment Fund, 243 - 375 York Ave., Winnipeg, MB R3C 3J3.