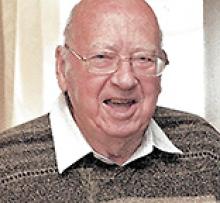 It is with great sadness that we announce the passing of Barry, loving husband, father, uncle, who passed away peacefully the morning of January 13, 2021, at the age of 87.
He leaves to mourn, his loving wife of 59 years, Barbara; daughters, Sandra and Sharon; nephew Steven Bannatyne (Jean, sons, Scott (Holly, son Graham) and Stewart (Jaclyn)); niece Linda Pashniak (widow of Dave Pashniak); nephew Scott Bannatyne of Vancouver, BC, and niece Susan Bannatyne of Melbourne, Australia. Barry was predeceased by his infant son Brian, and his elder brothers, Graham (and wife Lynn), Roderick (and wife Elsie), and William.
Barry was born and raised in Winnipeg; growing up in St. James and later settling down in Fort Garry after his marriage to Barbara where they enjoyed many years together with their close neighbours and friends. He graduated from St. James Collegiate in 1950, the University of Manitoba with a B.Sc. (Hons) Geology in 1954 and a M.Sc. in 1959 after completing geological surveys of Rankin Inlet (NWT), Bernic Lake (MB) and Port Moody (BC).
Barry spent his entire 30-year career with the Geological Division of the Mines Branch, Province of Manitoba. He spent many summers tromping though marshes, climbing cliffs and camping among the stars, bears and black flies.
Barry had a lengthy retirement and enjoyed winters in Arizona and summers at Albert Beach. He loved reading books, listening to music, playing on his iPad and making jigsaw puzzles. Many hours were well spent in the lake-side screen porch. Visits from various fur family members were always a highlight.
Barry will be interred in the family plot at St. John's Cathedral. A small reception with family will be held sometime in the spring.
Thank you to the doctors and nurses at the Health Sciences Centre for the kind care and support for the family. Special thanks as well, to Dr. C. Lowden for his kind words and advice.
Flowers are gratefully declined and in lieu, donations may be made to the United Way of Winnipeg, 580 Main Street, Winnipeg, MB R3B 1C7.