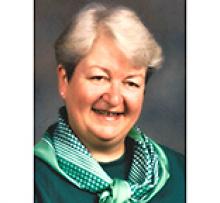 Christy died peacefully at the St. Boniface Hospital, with her devoted son Roger at her side. She had a heart attack January 4, from which she never regained consciousness. Up until then she lived independently in her own apartment.
Born in St. Thomas, ON to Helen F. Little (nee Shuttleworth) and A. Ross Little, both now deceased, she is survived by her son Roger Baker (Cheryl) of Chepstow, ON and grandson Wyatt Baker. She is also survived by brothers, Peter (Nonie) of Owen Sound, ON, Andrew of Calgary, AB, and Ron (Cath) of Nelson, BC. She loved all her nieces and nephews: Marion (Ted Hodson), Martha, Alexander, Heather, Chris (Kitty), Jane (Ryan Lundberg) and Jim Little, as well as many grandnieces and nephews and cousins across the country.
Growing up on Oxford and later on Yale, there were too many exceptional family friendships to name, most of whom are still valued friends today.
As the eldest of four, Christy held an important leadership role in the family from an early age, which was valued to the end of her life. Notably at age 10, she chaperoned two brothers, 8 and 6, all the way to Toronto. The CPR was not pleased. In her teens, she curled at the Winter Club, organizing teen dances, golfed at St. Charles, participated in the Humpty Dumpty Club and was a Girl Guide leader. School was River Heights and Kelvin, plus a year at Western. She had a number of jobs including one in the UK before she joined TCA, now Air Canada. Most of her 35 years with AC were in Toronto where she was also involved with the Junior League's publication on accessibility. AC perks allowed her to share more travel with Mom and Dad than they would have been able to enjoy on their own. She transferred back to Winnipeg with AC to provide the significant care and support needed for Mom and Dad to live out their days at 188 Roslyn. This was truly a blessing for them and all of us. Mom died a year and a half after Dad, but not before Roger found us. A son that Christy had given up for adoption in 1967, Roger came (back) into our family in 2004. The bond and mutual care between Roger and Christy benefited them both significantly. This supported her to heroically overcome two challenges she'd wrestled with throughout her adult life. Her achievement in that is a source of great joy and pride for the family.
In recent years, Christy found immeasurable mutual support in her lunch ladies group. She also enjoyed the counting ladies and the socializing and structure that life around St. George's gave her.
We are particularly happy for the friend she found in Helen Quinn. Helen was Christy's health advocate through her bout with lung cancer. They had a pact to phone each other during covid-19 and Helen has been a constant help to the family through these sad times.
Finally, we'd like to give special thanks to the skilled, tireless and ever so sympathetic doctors, nurses and others who cared for Christy through her last week in the Cardiac Intensive Care Unit at the St. Boniface Hospital
A memorial service will be announced at a later date.
In lieu of flowers, Christy suggests a donation to the Heart and Stroke Foundation of Canada or St. George's Anglican Church Crescentwood.