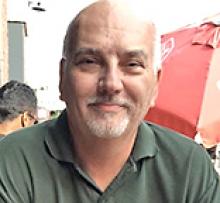 Lev was the first child born to Terry and Norman Boutang of Vassar, MB. Channing, Careen and Dudley completed their family. After they moved to Winnipeg, Lev attended Lord Selkirk, Andrew Mynarski and Sisler schools. He graduated from Glenlawn Collegiate (he always joked that he chose the "four year plan"). He was proud to be the Manager of the basketball team, where his main job was keeping statistics. That may have been the start of his attention to details that was sometimes beneficial and sometimes a bit annoying. Lev had lots of friends in school. He worked part time at Saratoga Bowling Lanes and Dakota Lanes with lifelong friend Rusty Miller. Bowling became one of Lev's favourite things to do. He also talked about summer holidays with his Aunt Alice and cousins at Ear Falls, and part time work on the railroad. After graduation Lev travelled to Europe with a couple of friends. Being the fussy eater he was, he survived on french fries and beer for most of those two months.
After a short time at university, Lev started working at Autopac, where he made two more lifelong friends, Gerry Dubuc and Mike Hees. Concerts with Mike and golfing with Gerry were two of his favourite things to do.
Lev met Donna in 1975. He was quick to make friends with Donna's best friend and husband, Debbie and Ron McArthur. Lots of good times and great memories were made over the years. Donna and Lev married May 28, 1977. Josh was born in 1981 and Kailey in 1984. The kids made Lev's world complete. He was so proud of them. He managed many of the sports teams they were on (always on top of those "stats") and made many more friends with parents of other kids on the Glenlee teams.
Lev worked at Arnold Bros. Transport for over 25 years. His holidays were often spent visiting Donna's parents in Strathclair, MB. Lev spoke of how much he enjoyed the many drives they took with Maurice and Winnie. They never really knew where they'd end up. Lev gradually embraced the country lifestyle and loved the extended Strathclair family he became a part of. The fair with its parade and pancake breakfast and times spent in Carson's shed were special.
Christmas and other holidays in the city were spent with the Boutang side of the family. The after dinner card games were competitive but always ended with lots of laughs. Having so many cousins made extended family time fun too.
In recent years Lev was unable get out very often. He appreciated when Chan came to hang out on his days off. Lev remained close with his mom. He cherished the phone calls they shared when he called her every evening. Last words were always I love you.
Lev loved reading, music, the Jets and Bombers, Coronation Street and bingo. He loved keeping detailed lists, take out food and sweets. His dedication to and love for Josh was obvious. After Josh was hurt, Lev would go to "hang out" with him almost every day after work. Sports and Coronation Street were watched and discussed in great detail. Lev was devastated when Josh died. Kailey and Lev had a special relationship. Especially in more recent years, Kailey would take her dad to his many appointments and think of things they could do together (like going to Goldeyes and Jets games and golfing - Lev driving the cart and Kail playing the course). He always kept her laughing with his groan-worthy dad jokes.
Lev had diabetes. He dealt with his ongoing medical issues, which greatly affected his daily life, without complaint. Through it all he had a positive attitude and a good sense of humour. He appreciated everyone's help and loved being included.
Lev had a big heart - but in the end, it was his heart that failed him. Donations to Diabetes Canada or the Heart and Stroke Foundation would be appreciated.
Lev continues to be loved by his wife Donna, daughter Kailey, mother Terry, sister Careen (Jack), brothers, Channing (Colleen) and Dudley and families, as well as brother-in-law Gerry. Leaving this earth before him were his son Josh, his dad Norman, and in-laws, Maurice and Winnie and Yvonne.
Thank you to the many medical people who have helped Lev over the past few years, and to the family and friends who are helping us through this difficult time.
A celebration of Lev's life will be held at a later date. When allowed, his ashes will be buried in Strathclair alongside his son, Josh.
If you have read Lev's story to the end, he would be pleased. He read every word of every obituary, every day in the newspaper. He said "People have interesting life stories." We hope you have found his interesting too.