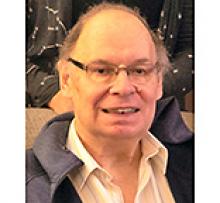 Jerry Popiel was born in June 1944 and raised on Day Street in Transcona. "The Pope," as he was known to his school friends, was the second of Nancy and Peter Popiel's three children. After graduating from Red River College in the 1960s, he risked his life working on natural-gas pipelines for several years before accepting - after some negotiations from a payphone atop a mountain in Banff - a job at Manitoba Telecom Services, where he worked for the rest of his career.
Jerry had a passion for solving problems and was one of the world's experts on telephone noise. With his colleague and lifelong friend George Bock, he wrote The KISS Book - a technical troubleshooting manual that was reprinted numerous times and is still in circulation internationally. He travelled extensively to gather and share expertise in his field.
After his retirement, Jerry focused on his prolific garden (he was especially known for his tomatoes) as well as swimming, walking, and spending time with family; he was devoted to his mother until her death last year at the age of 100.
Jerry was an early adopter of new technology and meticulously researched the best products to buy. He always knew which TV, computer or car was the best and why, and even in his 70s he was among the first to try out the latest mobile phones and smartwatches.
Jerry died peacefully on January 6, 2021, following a battle with cancer.
He was predeceased by his mother and father and his older brother, Tony. He will be greatly missed by his partner, Anita Vergnano, sister Phyllis Sawatzky (Ken), sister-in-law Kay Popiel, nieces Wendy Sawatzky (Jason Hooper), Karen McRae (Rod), Natasha Popiel (Mike Brock), Alexandra Popiel, and nephew Nick Popiel. He doted on his great-nephews Evan and Nathan McRae and Holden and Bodhi Brock. Also mourning his loss are George and Pam Bock, who have been a great support to Jerry and Anita during this last difficult year.
At Jerry's request, no funeral service will be held.
In lieu of flowers, consider a donation to the Consumer Reports non-profit organization or a charity of your choice.