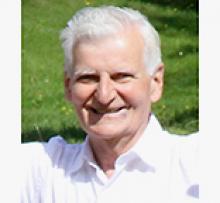 Gerhard Walter "Wally" Trinkies passed away peacefully on January 14, 2021.
He was predeceased by his wife Elizabeth "Betty" (nee Fehr) in 2019. He is loved and will be deeply missed by his sons, Gary (Sandra) and James; grandchildren, Ashley (Mark), Aleksandr (Courtney), Jennifer (Steven), Jaryn, Amber and Brett; and great-grandchildren, Victoria, Olivia, Isaac, Raya, Abigail, Rhett and Rorie.
Wally was born on September 25, 1935, in Germany. After completing primary school, he trained as a tailor. As a young man, he decided to immigrate to Canada. Wally settled in St-Pierre-Jolys, Manitoba, and met his bride, Betty. They married on December 23, 1961.
Betty and Wally raised their sons in Winnipeg, then Morden. In the early 80s they returned to Winnipeg. They enjoyed camping and fishing together. Wally was also a wiley cribbage player, and enjoyed teaching the grandchildren (and great-grandchildren) how to play. When the grandchildren were young, Wally frequently attended hockey, ringette, volleyball, football, or soccer games, and when he wasn't there he would likely be at a piano or dance recital. As the grandchildren started to get older, he found joy in watching his great-grandchildren do some of these same activities.
When Wally moved to Niverville, he was a regular visitor at the bank and Bigway. He loved to share stories of his time in Germany. He regularly enjoyed going for a drive to get a coffee and a donut from Tim Hortons, or a burger at A&W.
Wally loved his family, and was very proud of the accomplishments of his children, grandchildren and great-grandchildren. He will be dearly missed and will remain with us in spirit forever.
The family would like to thank all of the caregivers that he spoke so highly of. Thank you to Dr. Lee Cummings, Dr. Susan Green (CancerCare), staff at Niverville Credit Union Manor, home care, St. Boniface Hospital, and Riverview Palliative Care.
Due to Covid restrictions, a Celebration of Life will be held at a later date.